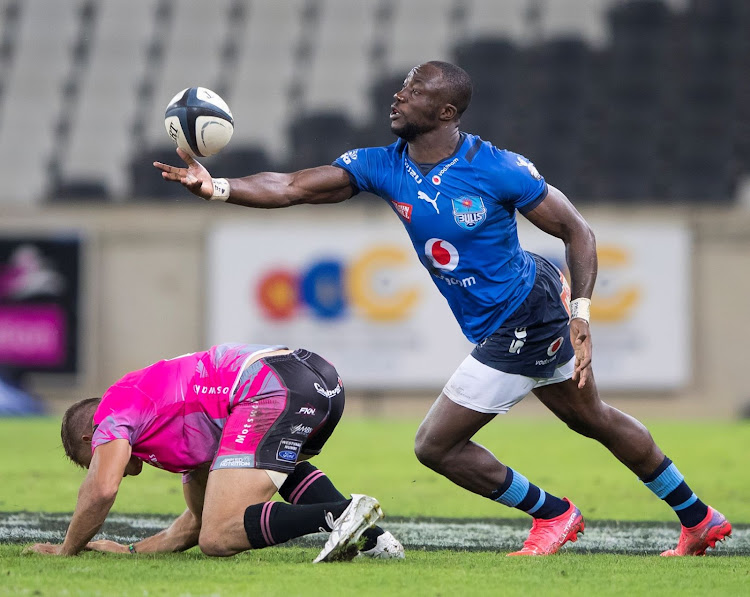 The Bulls' Madosh Tambwe during their Carling Currie Cup match against the Pumas on Friday in Mbombela. Picture: GALLO IMAGES/DIRK KOTZE

Elements of the Bulls’ game plan must be fine-tuned before they collide with Western Province in a blockbuster Currie Cup clash in Cape Town on Wednesday, says captain Cornal Hendricks.

Though the Bulls emerged with a 33-19 bonus point win over the Pumas in Mbombela (Nelspruit) in their opening match, Hendricks knows a bigger challenge awaits his side at the Cape Town Stadium.

In their opening match WP stormed to an impressive 48-36 win over the Lions to signal they will be a force to be reckoned with in the Currie Cup. The Bulls, who won the Currie Cup twice in 2021 because of unusual circumstances created by Covid-19, are gunning for a hat-trick of titles.

“The weather was looking good earlier, but we are a team that adapt, and when it started to rain, we knew exactly what we wanted to do. Credit to the coaches as well.

“As a collective team, I think we all did a great job. We are playing against a quality side Western Province next and are looking forward to it. There are still a few things to work on.”

It was an impressive start to the season by the champions, who were missing most United Rugby Championship (URC) players.

The Bulls resume their URC campaign with a match against the Stormers in Cape Town on Saturday.

Bulls lock Nortjé was chosen man of the match thanks to a standout display which helped his team to victory.

“It’s always a very tough game here at Mbombela Stadium, so I’m very grateful for the five points,” he said. “Especially since we had some tough times in the last few games. So credit to the pack for stepping up in the set pieces.”

Pumas captain Willie Engelbrecht said discipline had been an issue for his side.

“Our discipline let us down,” he said. “With a quality team like the Bulls, you can’t give so many penalties away because as soon as you make all your mistakes, they just thrive off it.

“That’s what made them so good. If we can work on our discipline and set-piece, I think we have a good chance against the Lions on Wednesday. We should just keep on going, and the boys must believe in themselves.”

After a bye in the opening round, the Sharks kick off their Currie Cup campaign with a home match in Durban against Griquas on Wednesday. Griquas will be looking to get on the winning track after going down 30-20 against the Cheetahs in Bloemfontein.

Now back to full fitness, he is itching to contribute to the team in their opening Currie Cup game against the Pumas
Sport
5 months ago

Blitzboks will keep foot on the pedal in Spain, says Visser