Stormers give Steven Kitshoff and Herschel Jantjies a break 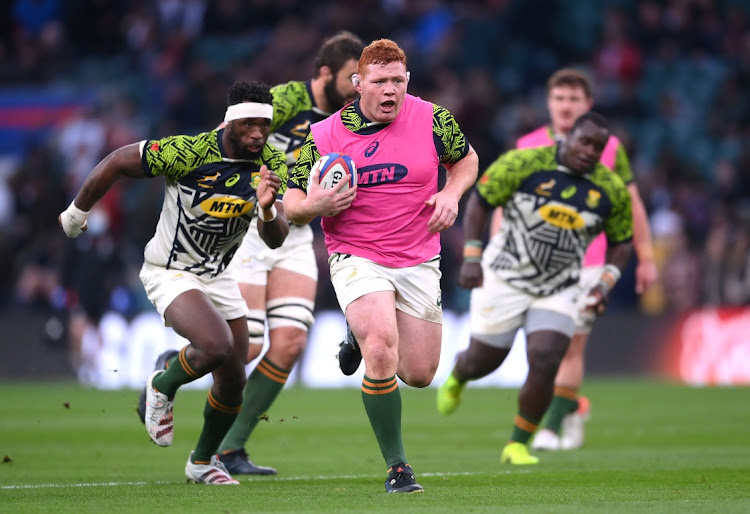 Steven Kitshoff of SA warms up before the Test between England and SA at Twickenham in November. Picture: GETTY IMAGES/LAURENCE GRIFFITHS

The spoilt-for-choice Stormers have opted to give Springboks Steven Kitshoff and Herschel Jantjies a breather and will not select them for Saturday’s United Rugby Championship clash against the Lions at Cape Town Stadium.

Loosehead prop Kitshoff missed just one of the Springboks’ 13 Tests this season. He did not play in the first Test against Argentina at the Nelson Mandela Bay Stadium in August and, while he came off the bench in nine of his 12 Tests, the Boks tend to split their props’ workload down the middle.

Jantjies played in 11, missing both Tests against Argentina. His only starting Tests were against Wales and Scotland.

“They need a break,” said Stormers assistant coach Dawie Snyman. “We have given them time off so they can get away from rugby and spend time with their families. They had to go into bio-bubbles [while on national duty] and were away from home for a long time.”

While Kitshoff and Jantjies, after a taxing season, are expected to resurface in the new year, locks Salmaan Moerat and Marvin Orie are looking for some valuable game time at the back-end of the year.

A neck injury has kept Moerat on the sidelines for most of the season, but he recovered in time to earn selection for the Springboks’ end-of-year tour. However, he did not see any action against Wales, Scotland or England.

Ditto Orie, who has spent much time in camp with the Boks this year. He played the latest of his seven Tests against Australia in the 30-17 defeat in Brisbane.

Utility back Damian Willemse is also back at training, but Snyman says he needs time off. Willemse played in seven Tests this year but has featured in just two since August 21.

Time in camp, rather than minutes on the field, is likely to explain his absence if he does not play against the Lions.

Snyman, though disappointed that the team will not face international opposition this weekend, is happy to see the team play after matches against European teams were postponed due to lockdown regulations last week.

“We’re disappointed, not frustrated, but it’s not anyone’s fault. It’s just a bit sad we couldn’t play on SA soil,” he said about last weekend’s postponed match against Zebre.

“It is of great importance to us that we get to play this week. Our business is to play, but it is the times we live in — we can’t control things and it is a changing environment. We are grateful that we will be able to be on the pitch on Saturday.”