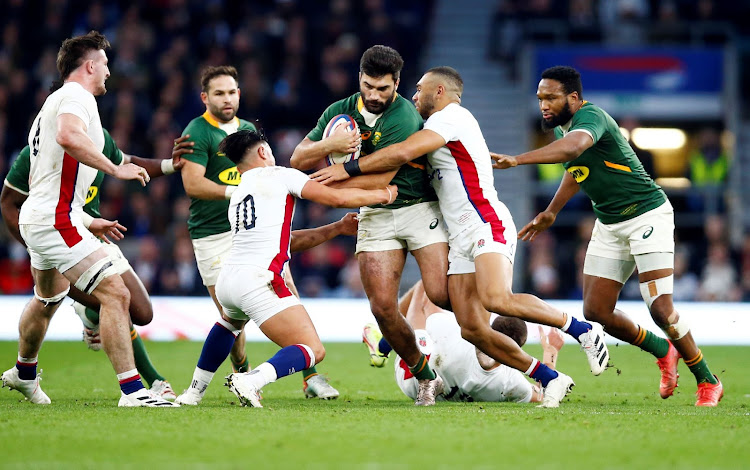 Adapting to law changes and improving skill sets in the wider channels will be crucial for the Springboks when they regroup in June ahead of a Test series against Wales in July, centre Damian de Allende said.

After a last-minute defeat to England at Twickenham on Saturday, De Allende said the Boks have to regroup and look to the future and the 2023 World Cup in France. The loss against England denied the Boks a clean sweep of wins on their UK tour after earlier victories over Wales and Scotland.

“We have grown and we have to adapt to how the laws are changing,” he said. “People want attractive rugby, but I still think the way we play to our systems is very good.

De Allende said missed opportunities were costly for the Boks at Twickenham. “England took their opportunities a lot better than we did and I think we left a few points out there.

“That is Test match rugby. If you don’t take your points and opportunities at the right time, you fall short and that is what happened.”

“Yes, they definitely offered something different,” he said. “After they lost Manu Tuilagi to injury, who is an exceptional player and is quite direct and very strong with ball in hand, they had a few playmakers on the field.

“They got width quite nicely and I don’t think we adjusted well enough to that. Credit to them when you try to go wide in the game and in wider channels you have to execute with ball in hand.

“They had very good passes and they executed that skill very well. We will have a good look at this game and when we get together again we will have to learn from what they did on the field because the way they did it was pretty good.”

Despite many challenges, the Boks could hold their heads high. “It has been a massive year in terms of being in bubbles,” De Allende said.

“The most I will take out of the year are the memories.  We had to create new memories together as a squad. Despite the sadness in the dressing room after the England loss, I know we can look back on the year and hold our heads high and smile at the memories we have made.”

Duo has helped the Springboks win the Rugby Championship, World Cup and Lions series
Sport
5 months ago
Next Article