We are doing a lot of hard work on defence and on creating opportunities, says Bok centre 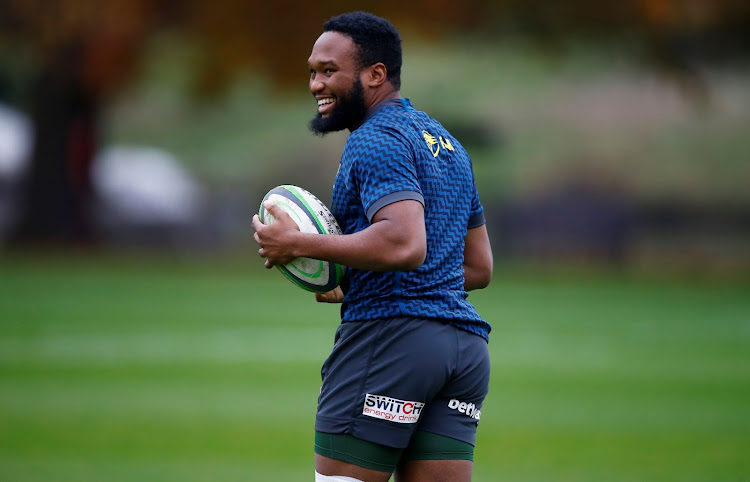 Centre Lukhanyo Am at a training session in London ahead of the Springboks’ match against England at Twickenham on Saturday. Picture: GALLO IMAGES/ STEVE HAAG

Craving to end the season with a win, the Springboks will bring out their gleaming A game when they face old foes England at Twickenham on Saturday, centre Lukhanyo Am said.

Victory in London would enable the Boks to remain unbeaten on their three-match UK tour and ensure they retain their top spot in the world rankings (kickoff 5.15pm SA time).

The Boks are up against an England side who have painful memories of a defeat to their southern hemisphere rivals in the 2019 World Cup final in Japan.

“This weekend we are definitely going to bring our A game and hopefully come out tops,” Am said.

The Qonce-born star has been nominated for the coveted international rugby players men’s Try of the Year award thanks to a dazzling five-pointer against the British & Irish Lions.

The former Border Bulldogs and Southern Kings centre is up against French centres Pierre-Louis Barassi and Damian Penaud for the award, and All Blacks loose forward Luke Jacobson.

Am was nominated for his brilliant try in the SA A victory over the British & Irish Lions in July.

Asked if he would score another dazzling try on Saturday, Am said: “I don’t know. Let’s see what happens at the weekend.”

When the Boks beat Scotland in their previous game, Am shone in his team’s execution of turnover attack at Murrayfield.

“We are doing a lot of hard work on our D [defence] and creating opportunities,” he said. “The Boks have managed to capitalise on turnover attack and we scored two beautiful tries against Scotland. We will keep working on it.”

Am said the Boks are wary of conceding penalties for high tackles and “seat-belt tackles” under strict laws imposed by referees in the northern hemisphere.

“With our style of D we try to go for the legs,” he said. “As a team, we work really hard defensively on level changing and tackling low.

“We all have our roles... in the team and we try to master that week in and week out.”

Bok coach Jacques Nienaber said he takes his hat off to Am for the giant strides he has made in his rugby career.

“Lukhanyo and I have come a long way,” he said. “One day I went to coach at Border in 2015 and Lukhanyo and Makazole Mapimpi were in that group. So Lukhanyo and I go back a bit. I did not coach him specifically, but he was in the group.

“I remember [SA director of rugby] Rassie Erasmus and I were on the plane back home afterwards, and he asked whether I had seen that centre [Am].

“But I had been busy with the defence of the forwards around the ruck to get the structures right there. So I said: ‘No Rassie I did not see him.’

“He replied: ‘There is a talented guy.’

“Just afterwards, Lukhanyo went to the Sharks and his career took off. I take my hat off to him.

“Lukhanyo was at the same school as my wife at De Vos Malan in King William’s Town [Qonce].

“I would not say they have the same high achievement programmes like Grey College and other big schools. So the amount of work you must put in to get where he is today speaks volumes about him.”

England’s Farrell and George to miss Bok game through injury

Pollard, Reinach and De Jager are drafted into the starting line-up in rotational switches
Sport
1 week ago

New Zealand’s decision-making will be key against France, says Cane