Bok loosehead bulks up for Scotland, whose scrum will not be easy pickings on Saturday 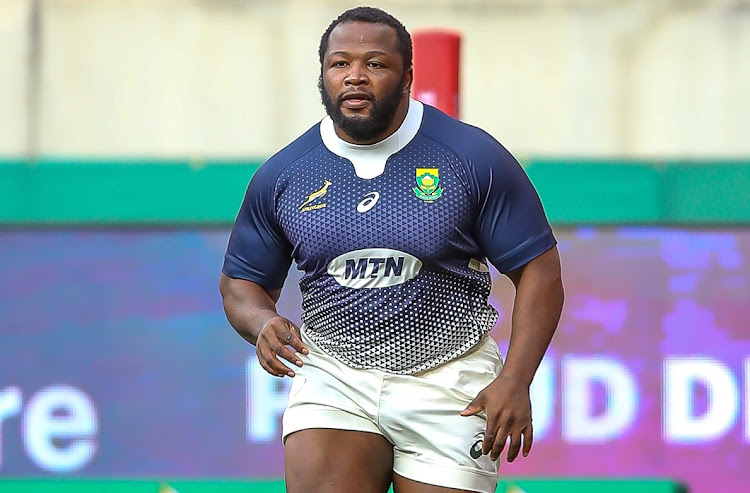 The saga of Ox Nché’s craving for cake had a happy ending in Edinburgh this week.

The Springbok loosehead prop’s wish to reduce to crumbs confectionery containing “chocolate, caramel or vanilla” has been satisfied but he is not expecting his team’s battle against Scotland on Saturday to be a piece of shortbread.

Scotland are not easily downed, as the Wallabies discovered at Murrayfield last weekend. “They take pride in their set pieces and their mauling. They got a lot of reward from the scrums. We are expecting a good challenge there,” Nché said during an online media conference.

Scotland has become a complex, multilayered creation under coach Gregor Townsend, and these days even contains some good old SA vetkoek in the shape of Pierre Schoeman, who like Nché, wears the No 1 jersey.

Ladies and gentlemen The cake has landed ,I repeat THE CAKE HAS LANDED !

Thank you @MattP555 ,It was delicious 😋 Let the world know that your Word is rock solid 👊🏼#OxTheCakeWhisperer #Everydayisagooddaytohavecake pic.twitter.com/4dx9fSeGHW

“We have a goal to achieve. It is not against any individuals but against the entire pack,” Nché said about the SA presence in the opposing camp. “We need to show our physicality. We don’t see it as seven Scottish guys and Pierre. We just want to exert our plan onto them.

“It will be a different kind of battle,” Nché said about this week’s task compared to the one they faced against Wales. “I worked with Pieter de Villiers at SA Schools and under-20 level. I know he is a very good coach. We can see how well they did against Australia.”

Schoeman did duty against the Wallabies last week and helped deliver a scrumming performance that contributed richly to their 15-13 victory over the team that beat the Springboks in back-to-back battles in the Rugby Championship.

“It is very different because they pose different challenges,” Nché said  about the prospect of playing the team that vanquished the Wallabies. “We can’t use the same rationale. If you look at Australia and New Zealand. The All Blacks have been beating Australia the last few years and we beat the All Blacks. It is a unique challenge with every team, I’d like to think,” said Nché.

Elton Jantjies, who takes over the No 10 jersey this weekend, has no doubt the Bok forwards will again rise to the challenge in the way they did against Wales in their 23-18 victory last Saturday. “I know our boys will be ready,” he said.

Jantjies’ selection raised the mouthwatering prospect of him going head to head with Scotland’s much vaunted playmaker Finn Russell. Jantjies recognises the threat Russell poses without reaching for the hyperbole that often accompanies the Scotland playmaker.

“We all saw what he is capable of in that last Test of the British & Irish Lions,” Jantjies said. “I really think he made a big difference. He challenged our group in a different way.

“For us it is about working on our systems. We must make sure we stop what he throws at us.”

Like Jantjies, Russell is a player gifted with touch and vision from a different dimension but he does not always reach for his bag of tricks. Russell is equally adept at playing the percentages and it is anyone’s guess what part of his repertoire he will present on Saturday.

“We’ll see in the first 10, 15 minutes which way they are going to play,” Jantjies said. “Then it is up to us to find solutions.”

Jantjies takes over from Pollard for Scotland Test

It will be another grind if it rains again all match long as last Saturday against Wales, mentor warns
Sport
9 months ago
Next Article