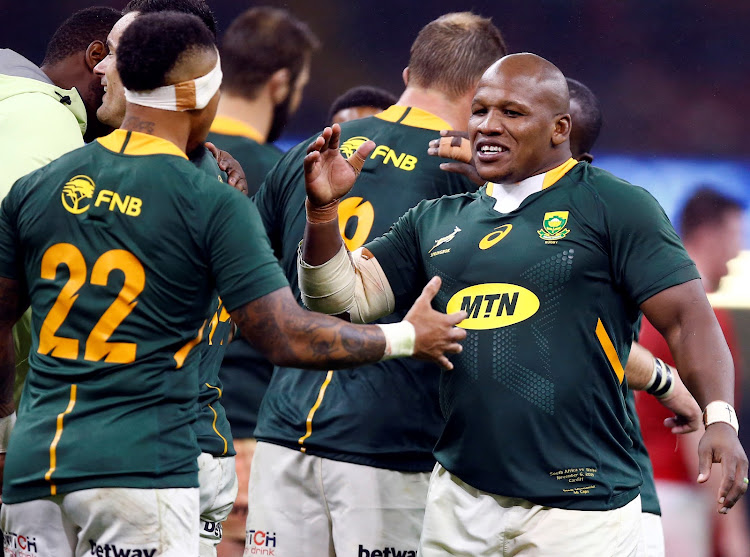 A jubilant Bongi Mbonambi celebrates with Elton Jantjies after SA's win over Wales  at the Principality Stadium in Cardiff. Picture: STEVE HAAG/GALLO IMAGES

It was the experience of old hands Duane Vermeulen and Frans Steyn that helped to keep the Springboks cool during a pressure cooker win over Wales, prop Bongi Mbonambi said.

The Boks left it late to get their three-match UK tour off to a winning start when they beat Wales 23-18 in front of 75,000 fans at the Principality Stadium in Cardiff.

This Saturday the Boks face Scotland in Edinburgh before travelling to London to take on England in their final game in the Autumn Nations Series.

The 34-year-old Steyn, who came off the bench to replace fullback Damian Willemse early on in the Test, produced a man-of-the-match display to help the Boks start their tour on a winning note.

“There is a huge difference in style between the northern and southern hemisphere teams,” Mbonambi said. “We got a bit of a taste of it during the British & Irish Lions series.

“We knew Wales were going to stick to the same plan with a high kicking game. Our back three did very well and we knew it would be a tough game, especially up front.

“Wales are very good and they have a tough pack to break down. As you saw it took almost 80 minutes for our pack to get over the line. But we knew at a stage they would break down and not take that much pressure.

“Our team handled it well. Experienced guys like Duane and Frans kept us cool and in the game. We knew we would have to put them under the pump from the start.

“I must say that the bomb squad [the replacements] made a huge difference. We knew that us starting the game [Ox Nche, Trevor Nyakane and Mbonambi] we would have to put them under pressure with our scrums and mauling.

“You saw at the end that it definitely paid off. So that was the plan. Every starting and reserve pack that get picked have a plan and purpose. There is a process and there is a lot of thinking going on behind it. When we are on the field everyone knows their job and what they have to do.”

Wales coach Wayne Pivac said his side fronted up well to the challenge of playing the world champions.

“I think playing SA, in those wet conditions which is ideal for how they want to play the game, was always going to be a testing time,” he said. “I said we stood up to that Test well.

“There were a couple of penalties that we gave away but if we can tidy that up, we’ll be competitive against the world champions in their own conditions. It was a big tick in the box as far as the coaching group was concerned but there’s always things we need to take away and work on.

“The guys put in a heck of a shift. If you look at the performance last week [against New Zealand], and coming up against SA in these conditions was always going to be a big ask.

“We could have won the match and it came down to a couple of moments. We gave away a silly penalty before half time and then another to set up their try.

“Outside that, we’ve a bit of work to do at the scrum, but we matched them across the park and led for periods.

“I said it was a big pat on the back for their effort.”

GAVIN RICH: Rassie should do another video