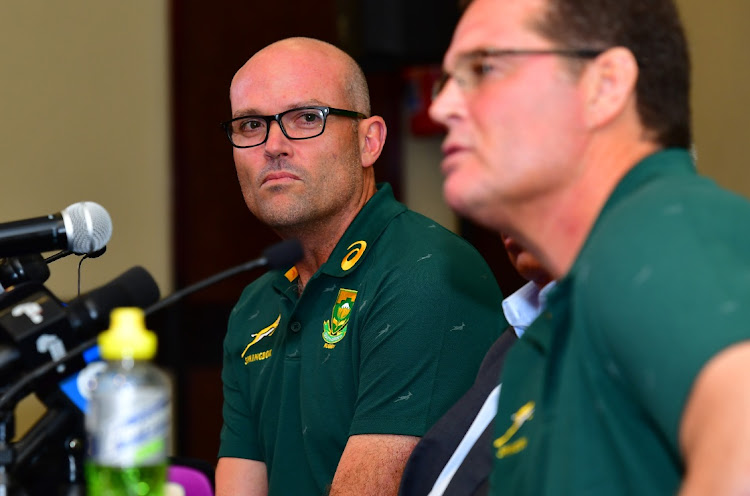 Rassie Erasmus, SA Rugby’s much talked about director of rugby, will not be carrying water bottles to the field in the Springboks’ three Tests in the UK in November.

Erasmus, who much to the chagrin of opposition coach Warren Gatland started the practice during the series against the British & Irish Lions, did not continue in that role during the Rugby Championship as he did not travel to Australia.

It was said he would reprise the role on the Springboks’ end of year tour to Wales, Scotland and England especially after Bok coach Jacques Nienaber indicated last week that Erasmus would resume “his normal role” on tour.

However, Nienaber has since poured cold water on the idea of Erasmus carrying bottles in Cardiff, Edinburgh and London.

“Rassie is here in his capacity as director of rugby,” he said from Paris in an online media briefing. “The normal trend was always only two water carriers in the technical box, but for the British & Irish Lions series World Rugby made three available and that was a role that we said we were going to fill internally. That gave Rassie the opportunity to be the water carrier,” Nienaber said.

“But we are now back to two water carriers in the technical zone, so there is no space for him. We normally had certain individuals that would fulfil that role and they will continue fulfilling that role. He will fulfil his normal role as director of rugby and he will be in the box with us at the top,” Nienaber reiterated.

Erasmus dispensing water and advice got under the skin of the Lions’ brains trust. Coaches are not supposed to act as water carriers and the Springbok camp was keen to point out Erasmus is not employed as a coach.

Before the end of year tour kicks off in Cardiff against Wales on November 6, Erasmus and SA Rugby have to appear at a World Rugby disciplinary hearing. They are in the dock over the former’s hour-long video posted online in which he criticised match officials after the first Test against the Lions.