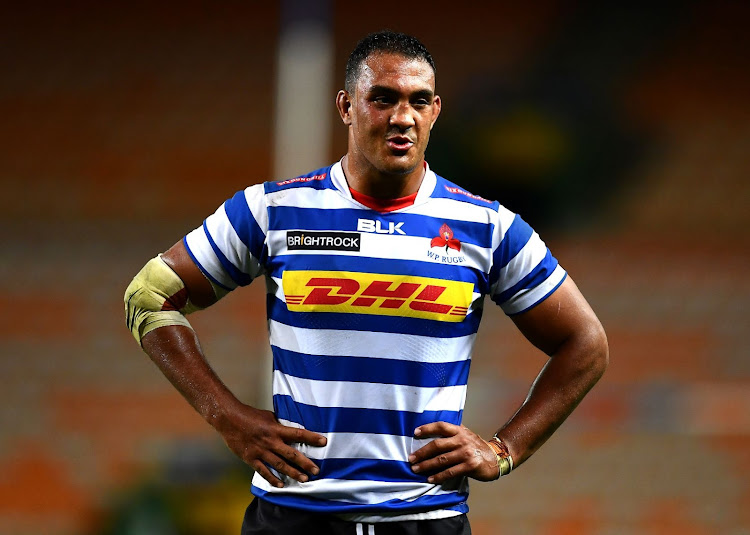 Uncapped Stormers lock Salmaan Moerat is looking forward to the challenge of being in the Springbok squad for Tests against Wales, Scotland and England. Picture: ASHLEY VLOTMAN/GALLO IMAGES

Uncapped lock Salmaan Moerat is champing at the bit for an opportunity to pull on the green and gold when the Springboks face Wales, Scotland and England over the next four weeks.

The giant Stormers lock is at a training camp with the 32-man Bok squad in Paris as they make final preparations for a Test showdown against Wales in Cardiff on November 6.

Moerat earned his Bok call-up after a series of impressive displays for his franchise.

“It has been very special and nice to join up with the guys,” Moerat said. “This camp we are having in France is ideal to get to know the environment and how they [the Boks] operate.

“The guys have been very welcoming and it has been very good. I just want to become a better rugby player in the next three to four weeks and learn as much as possible from the senior guys and coaches.

“I am really looking forward to getting to know how they do things around here. Hopefully I will get an opportunity. If not, then to become a better rugby player and to enjoy the experience and to take it all in.”

Moerat said the Boks would have one eye on the World Cup, which takes place in France in 2023. “As a group we do want to plan for the next World Cup.

“On a personal note, I am pretty sure our focus will be to play good rugby and get results over the next four weeks. I have been privileged to be involved in the SA Rugby set-up at school and Under-20 level.

“So I have been through that system and I have been to one or two training camps. I have a chance to know what it takes to make my way into the squad. Now I am very privileged to be here.”

Moerat is the only newcomer in coach Jacques Nienaber’s squad that featured in the Lions series and Rugby Championship.

He will join forces with Eben Etzebeth, Lood de Jager, Franco Mostert and Marvin Orie in a strong group of second-rowers.

The only other uncapped player in the squad is scrumhalf Grant Williams, who travelled to Australia with the Boks for the Rugby Championship.

“We are two years out from the Rugby World Cup in France and we have close to 20 Test matches before we start our defence of the title, so every match will count in terms of building confidence and consistency as a group,” Nienaber said.

“Salmaan has established himself as a talented lock and captain since his younger days in our junior structures and he has continued to show his class at senior level for the Stormers and Western Province.

“His call-up is well earned, and we are looking forward to witnessing what he adds to the squad. He is also familiar with most of the players in the squad, having either played with them or against them, so we have no doubt he will slot in with ease.”