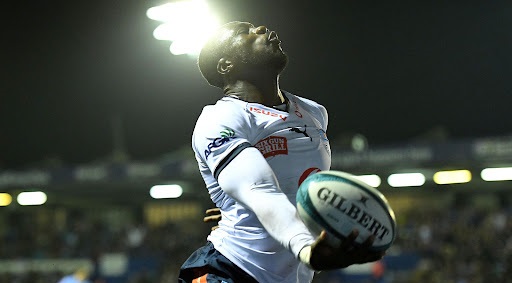 Madosh Tambwe of the Bulls celebrates his try during the United Rugby Championship match against the Cardiff Blues on Saturday. Picture: BEN EVANS/GALLO IMAGES

It may have taken them almost 200 minutes of game time to get on the roll, but a superb second-half performance saw the Bulls finally break their duck in the United Rugby Championship with a dominant 29-19 win over the Cardiff Blues at Arm’s Park on Saturday.

Coming into halftime at 16-3 down and looking demoralised and off the pace, whatever happened at the break made a significant difference as it was a totally different side that emerged in the second half and never let Cardiff back into the game.

But it came at a high cost as they lost Springbok flyhalf Johan Goosen to a horrible-looking knee injury in the first half.  He was carried off and could be out for a long time if the worst fears are confirmed.

That the Bulls won the second half 26-3 shows just how dominant they were after the break. But in the first half they failed to convert a one-man advantage after a yellow card and were generally off the pace and beaten at the breakdown, looking listless and never in with a shout.

The Bulls were also on the wrong side of decisions as their discipline let them down, particularly in the breakdown area, and they allowed Cardiff to dominate everything to rack up the 13-point cushion at halftime.

It came through three first-half penalties by Rhys Priestland and a try from close to the line by Matthew Screech, with just a single Chris Smith penalty to answer for it.

But in the second half the Bulls started punching up the middle and being more direct, and using their wingers more to make space for themselves.

The introduction of Arno Botha to the loose trio paid dividends and suddenly Marcell Coetzee was freed up to hunt for turnover ball, a factor that would become crucial later in the game.

But it wasn’t just the changes, it was a total different attitude for the side as they suddenly found their confidence and started to make inroads where in the first half there were none.

It started with a period of sustained pressure, a penalty and a tap-and-go by Elrigh Louw that easily dissected the defence to barge over the line. Suddenly the Bulls were within a try of their opposition.

More pressure and Smith slotted another penalty, bringing the deficit down to three before the Bulls finally had some luck go their way.

A dropped ball in the midfield was kicked through by Madosh Tambwe and the winger then sped past a chasing Priestland to easily win the race and put his side into the lead.

From there the clear momentum shift showed a Bulls team growing in confidence and stopping Cardiff’s attempts at a comeback with ease.

The pressure brought results, as Smith slotted two more penalties to take his team to nine points up before Priestland brought them back with a penalty to a six-point deficit.

But then, in the dying moments, Coetzee stepped up and turned over another ball, and the penalty ended Cardiff’s hopes.