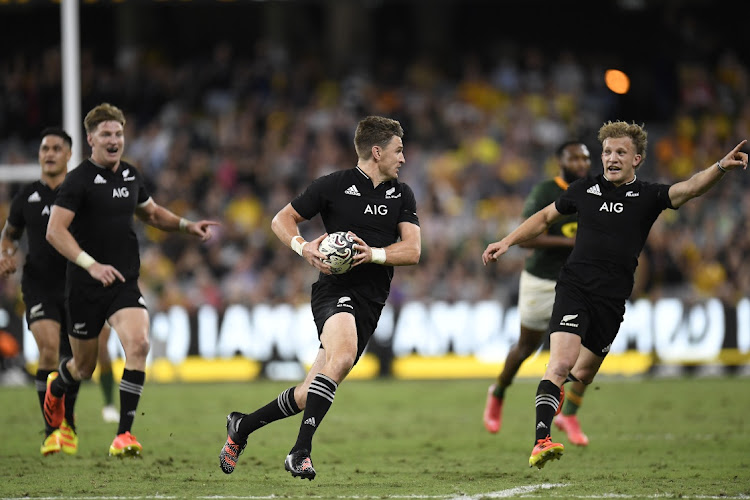 Beauden Barrett of the All Blacks is directed to kick the ball out during the Rugby Championship match between the All Blacks and the Springboks at QCB Stadium on September 25 2021 in Townsville, Australia. Picture: GETTY IMAGES/IAN HITCHCOCK

Melbourne - Centre Anton Lienert-Brown has returned from a hamstring injury and flyhalf Richie Mo’unga is back from hotel quarantine for the All Blacks’ final Rugby Championship match against SA on Saturday.

Lienert-Brown slots in at outside-centre, pushing Rieko Ioane to the wing and George Bridge out of the match day 23 for the clash on the Gold Coast in Australia.

Mo’unga, who had to isolate for two weeks as part of Covid-19 protocols after arriving late to Australia, is being eased back via the bench, leaving Beauden Barrett in the No 10 jersey.

Coach Ian Foster made no changes to the pack named last week for New Zealand’s 19-17 win over SA in Townsville which wrapped up the title with a match to spare.

Foster was unhappy with the performance of his back three against the Springboks, however, and has cut winger Will Jordan along with Bridge from the match day 23.

“I think our back three perhaps weren’t at the level we needed them to be last week. So it’s clearly a message that’s been sent,” he told reporters in a video call on Thursday.

Brad Weber has been promoted to starting scrumhalf, with TJ Perenara dropping to the bench as the All Blacks look to finish the competition unbeaten.

Asafo Aumua comes in at reserve hooker and George Bower comes in for prop Karl Tu’inukuafe on the bench.

“We learnt some lessons last week,” said Foster. “We didn’t look after the ball as well as we could have and some of our work at the ruck wasn’t as good as we wanted.

“We have to lift our performance in that area and the team is keen to get that right this weekend.”

New Zealand, SA, Argentina and Australia players have to isolate and cannot mix with the public
Sport
3 weeks ago

There are mitigating factors, but the three losses point to poor discipline
Life
2 weeks ago