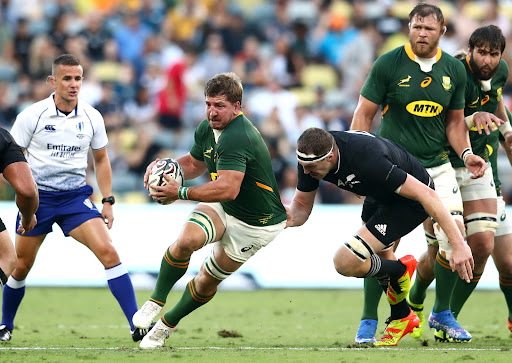 The Springboks' Kwagga Smith charges forward during their Rugby Championship match on Saturday against the All Blacks at QCB Stadium, in Townsville, Australia. Picture: GETTY IMAGES/CHRIS HYDE

A desperate Springbok side will empty the tank in a last-ditch effort to snap a three-game losing streak in Saturday’s clash against the All Blacks, loose forward Kwagga Smith says.

The Boks are desperate to end their Rugby Championship campaign on a high against their old foes in the 101st meeting between the sides at Gold Coast (kickoff 12.05pm SA time).

In the centenary Test, the Boks were beaten at the death when Jordie Barrett slotted a penalty to clinch the match with less than two minutes to play in Townsville.

After Saturday’s clash, the Boks will next be in action on November 6 when they face Wales in Cardiff in the Autumn Nations Series.

“We had a hunger for the All Blacks game because our second game against Australia wasn’t a great performance,” Smith said. “I think we played well against the All Blacks and we were a bit unlucky.

“We have a good squad here and everyone is positive. It’s the last one [Saturday’s game against New Zealand] before we have a bit of a break. So we will give it our all and make sure we leave everything on the pitch.

“Our forwards played well in Townsville, but I think we did not get the momentum we wanted in our mauls. So we will look at that and work hard. For me it was great to have an opportunity to start against the All Blacks. I love playing against them and it was a good fight.”

There will not be a lack of self-belief in the Springbok camp for Saturday’s clash, coach Jacques Nienaber said.

“Everyone had the belief that we could beat the All Blacks,” he said. “There wasn’t a speck of doubt in our mind that we could not beat them. We knew it was going to be a grind, and it was always going to come down to a point or two. When you take our recent history, the margins have been narrow, so it is going to be like that at times.”

Nienaber said an injury concern late in the game prevented the planned introduction of Elton Jantjies.

“I wanted to put Elton on at 70 minutes, but the medical team reported Marco van Staden had a shoulder complaint, and that meant Elton was the last guy on the bench,” he said. “That made it a tough call, but we didn’t want to be left a man down if Marco had to come off, and we were leading at the time.”

Propelled to victory over the Boks by Jordie Barrett’s late penalty, the Kiwis now look to close the tournament with a sixth win in a row
Sport
2 weeks ago