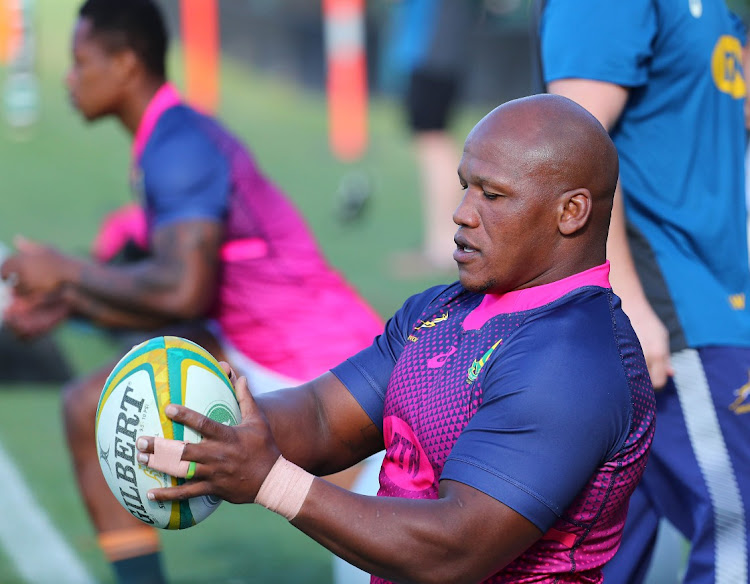 It is with their guiding principle that they made just one uncoerced adjustment to their team to play the Wallabies on Saturday‚ while their hand was forced into a second.

In an age where the din of social media’s white noise is often hard to ignore after defeat‚ the Boks have stayed true to their processes.

Concussion to lock Lood de Jager has brought Marvin Orie back into the starting team for Saturday’s return Rugby Championship in Brisbane.

Orie‚ who has played six Tests‚ will only start his second from the outset having done so against Argentina in Gqeberha in August.

In the only other change to the starting line-up‚ loosehead prop Trevor Nyakane this week swaps places with Steven Kitshoff who drops to the bench.

“The obvious thing we lose is Lood’s experience. He’s played 50 Tests‚” said coach Jacques Nienaber. “Marvin has played a handful. Marvin‚ however‚ is an experienced lock.

“He’s played a lot of first-class rugby in Currie Cup and Super Rugby. He’s been in this position. This is why he is with us. We trust him as a player.

“He’s played at the same school‚ Tygerberg‚ with Eben Etzebeth. They know each other well.”

Nienaber said “if everything goes well” De Jager should be ready for selection for next weekend’s clash against the All Blacks in Townsville.

Orie’s Test experience may be limited but he can be a handful if the Bok pack gets gainline ascendancy. Replacing De Jager‚ however‚ remains a tall order.

“Trevor brings experience‚” reminded Nienaber about Nyakane. “He played loosehead for us against Argentina but then sustained an ankle injury.

“He’s back to full fitness. We know how well he played at loosehead against the British & Irish Lions as well. He’s getting close to 50 caps‚ so that is something he is looking forward to‚” said the coach.

The two areas where the Bok brains trust may have felt compelled to stick to their guns was the six/two split on the bench‚ as well their goal kicking backup.

“It is for continuity‚” said Nienaber. “We try to think of team selection as unemotionally as possible.

“If we secured the last breakdown and were able to exit and win the game we would be sitting here smiling. We have to look at it from an objective viewpoint.

“Sometimes we win games and out of a possible 12 big ticket issues that we look at in our review‚ we may get four. Sometimes we lose matches and we tick 11 out of 12 and the only one we don’t tick is winning the match.

The Boks remain without the services of star wing Cheslin Kolbe who is still on the injured list.

“He ran today‚ quite well‚ next to the side of the field‚” said the coach. “He’s not a guy we will rush. We will wait. He is in return to training protocol. Once he’s done that he’ll be in return to play protocol.”

Nienaber stressed that injuries are difficult to predict but that the player should be available for selection within the next two weeks.

Apart from the flyhalf knowing what to correct, team is focusing on building for the next Rugby World Cup
Sport
4 days ago