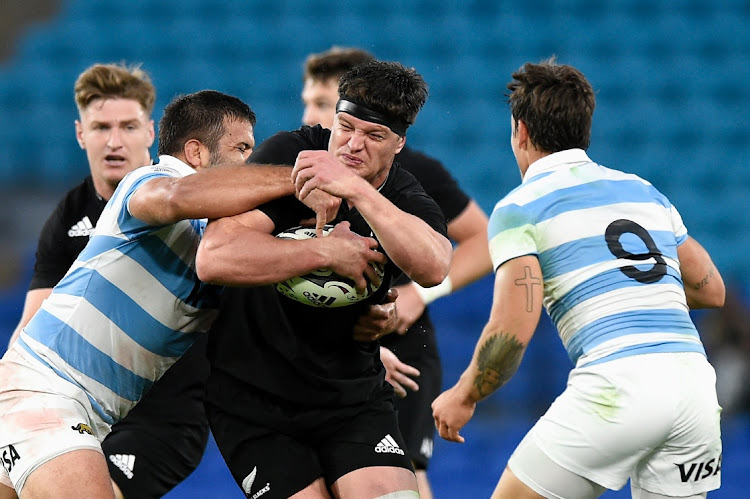 Scott Barrett of the All Blacks (C) is tackled during the Rugby Championship match between New Zealand and Argentina. Picture: MATT ROBERTS

Melbourne — New Zealand lock Scott Barrett has warned his teammates to be ready for a backlash from a chastened Argentina ahead of their Rugby Championship rematch in Brisbane on Saturday.

The All Blacks trounced the Pumas 39-0 at Gold Coast on Sunday to tighten their grip on the top spot of the table midway through the competition. Bottom-placed Argentina, who started with back-to-back defeats away to world champions SA, slumped to their third successive loss and have looked a shell of the team that stunned the All Blacks in the Tri-Nations in 2020.

But Barrett feels the New Zealanders can ill-afford to be complacent at Lang Park. “They’re going to be a different team come this Saturday,” he said on Tuesday. “Probably turn up with a little bit more of an edge after the performance on the weekend.”

The All Blacks were hard to fault on Sunday but Barrett said they had identified plenty of areas for improvement, one being the lineout after the Pumas’ success in disrupting their set piece.

“We’ve got a plan,” he said. “We’re going to have to adjust to the way they defend. We can’t get too carried away with trying to jump on their big, tall men.”

While still under Covid-19 restrictions, the All Blacks have enjoyed a taste of freedom on the Gold Coast, with players hitting the resort strip’s beaches in a region where infections are rare. New Zealand’s largest city, Auckland, meanwhile, remains in strict lockdown due to an outbreak, though restrictions have eased in other regions.

Hooker Codie Taylor said his wife and children were doing fine back home but he was worried about his mother.

“Every phone call is different,” he said. “Sometimes you want to talk to her for a long time and sometimes you don’t because it seems like things are about to explode. It’s just part of the reality for us at the moment.”