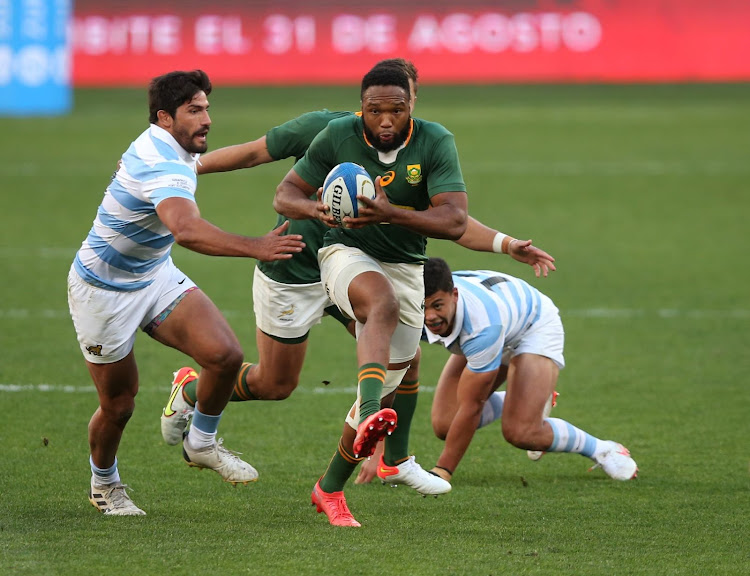 SA's Lukhanyo Am, seen here in the Rugby Championship match against Argentina in August, says the Springboks will not be underestimating Australia in their match on Sunday. Picture: RICHARD HUGGAR/GALLO IMAGES

Australia have a good mix of experienced and young players and should not be underestimated even though recent results have not gone their way, Springbok centre Lukhanyo Am says.

The Boks are facing four tough matches on the road in the Rugby Championship, starting with a clash against the Wallabies at the Cbus Super Stadium on Sunday (kickoff 12.05pm SA time).

Am will line up alongside fellow centre Damian de Allende in a pairing that spells trouble for the Aussies as they bid to regroup after two losses against the All Blacks.

Asked whether new faces in the Australian backline would struggle against an experienced Bok outfit, Am said: “Australia have a fairly balanced side with experienced players and a couple of new guys in the group.

“It means nothing. You can never underestimate your opponent or use that [inexperience] against them.

“I think the current Australian side are playing very good rugby and it is just unfortunate they have not been getting the results.

“From our side we are preparing as much we can to come out tops this weekend. As a new player coming into Test rugby it is definitely a huge step compared to local competitions or franchise rugby.

“For me it was nice coming into a group where there were a lot of experienced players around me which made my job relatively easy. I gained as much experience as I could from training camps and then took it into Test matches.

“The shared responsibility in the group kind of gave me the experience I have now.”

Am said the current Springbok centres wanted to build on the rich history SA has enjoyed in that position.

“In SA we are blessed with having great players, especially at centre, in the backline,” he said.

“Our generation is taking over that responsibility and we feel we are doing a good job. We strive to improve at all times. I have played with Damian de Allende for just over two years and during the time we have played together I have gained good experience,” he said.

“We have got to learn and feed off each other and that is one of the key things. We are trying to be the best we can be for the team and it is really working well because we know what we are good at. At all times we know what we need to work on and we keep ourselves on our toes.”

Am said it was exciting to be back on the field after a long break because of Covid-19 after the Boks’ 2019 World Cup triumph in Japan.

“It’s really been good to be back and playing Test matches again. My role in the team is definitely to be at my best at all times.

“We have managed to take up from the last time we played at the World Cup. We have a very good spirit and I think that gives opportunities for each and every individual to showcase their performance.”

Five of the changes to the starting Bok team that defeated Argentina 29-10 in the second round of the Rugby Championship in Nelson Mandela Bay are among the forwards.

Duane Vermeulen takes over from Jasper Wiese at the back of the scrum, and Eben Etzebeth comes in for Marvin Orie at lock.

A new front row of Steven Kitshoff, Frans Malherbe (both props) and Bongi Mbonambi (hooker) will be in action.

The two changes in the backline are on the right wing, where Sbu Nkosi replaces Cheslin Kolbe, who took a knock to the leg at training, and scrumhalf, where Faf de Klerk returns in place of Cobus Reinach.