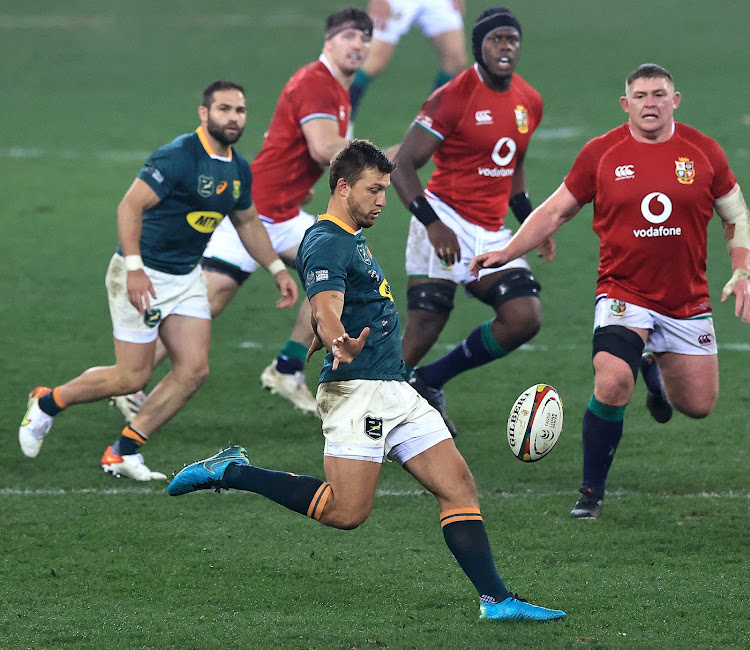 Handré Pollard clears the ball up field during the third Test match between the Springboks and the British and Irish Lions at the Cape Town Stadium. Picture: GETTY IMAGES/DAVID ROGERS

SA cannot afford to switch off and must maintain their winning momentum when they face an emotional Argentina outfit in Gqeberha on Saturday, Springbok flyhalf Handré Pollard has warned.

Because of a rotational policy aimed at keeping players fresh, Pollard missed out when the Boks beat Argentina 32-12 in their opening game in the Rugby Championship last week.

Pollard said the Bok squad are buzzing and ready to face what he believes will be a sustained onslaught from Los Pumas at the Nelson Mandela Bay Stadium (kickoff 5.05pm).

“We have our own standards we are chasing and so we cannot switch off at all,” he said. “Argentina are going to be very emotional and they are going to come at us very strongly. They are proud players and [a proud] nation, and they know they were not at their best last Saturday.”

Pollard dismissed claims from some quarters that the Boks play a boring brand of rugby.

“The criticism on our style of play is what it is,” he said. “Everyone has their own way that they believe is the right way to play rugby. For us it is not about entertaining, it is about winning.

“At the moment we are doing pretty well, so if it is not broken don’t fix it. We will keep on doing what we do and people can criticise us as much as they want. We believe in it and that is the only thing that matters.”

Pollard said it is important for the Boks to have goals in between World Cups.

“World Cups are massive but in between you want to achieve things, and there are three Rugby Championships to be won and a lot of stuff that goes on. At the moment we want to keep that winning momentum, and also build some squad depth and get some guys to gain experience before the next World Cup.

“That is a massive target for us and it will be great if we can achieve winning the World Cup again.

“Is it easy to stay switched on in a squad system, when we play one week and not the next. It’s not hard because of the way we prepare.

“As coach Jacques Nienaber says, you just have role changes, it is not rest. We did everything we could last week to prepare the boys so that they were at their best on Saturday against Argentina. Now it is the same for those guys this week.

“Every week you stay focused as much as you can and over the weekend you can relax a bit. It is also important just to have a bit of break mentally. On Monday we were all buzzing to go for the next game.”

Pollard said the new 50/22 rule would not affect how the Boks played on Saturday. The 50/22 law change allows a team to gain a throw-in inside the opposition’s 22m area by kicking the ball to touch with at least one bounce from their own half.

“We had a discussion about it and it is not something we are looking for,” he said. “If it happens it is a great bargain. The Boks will not adapt the way we play and our kicking game.

“We will stick with what we do and what we believe in. If the opportunity presents itself we will go for it and possibly take it. It is not something we will focus on at the moment.”

The lock has had to come back from injury, sickness and devastating losses on the field
Sport
9 months ago