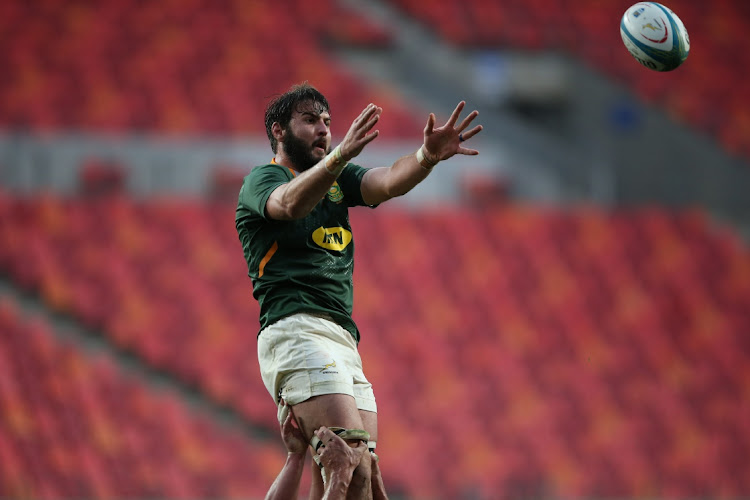 Lood de Jager will earn a 50th cap for SA in their Rugby Championship Test against Argentina in Nelson Mandela Bay on Saturday, a milestone that had looked doubtful as he battled with a career-threatening injury in 2020.

De Jager, 28, is one of the finest second rows in the game and his return to the Springbok side during the British & Irish Lions series went a long way to helping the world champions to victory.

He was forced off after just 20 minutes of the 32-12 victory over England in the 2019 Rugby World Cup final, one of his recent setbacks that included an injury to the same shoulder playing for Sale Sharks that left him questioning his future in the game.

“I have had a few more injuries than the normal guy,” De Jager told reporters. “But that is just part of my journey. You suffer those setbacks. Then you come back stronger. Every injury, as bad and disappointing as it is, is just part of your journey. You must see it like that.”

He concedes it has been a hard slog on the Boks’ return to international rugby after 20 months out, but that with each passing game he, and they, will get stronger.

“Match fitness is hard to get when you are not a naturally fit guy. I am not the best in training. Nothing comes close to match intensity and what you need in a game,” De Jager said.

“None of us really had the preparation ahead of the Lions series we would have liked. I also got Covid-19. With no preseason to get properly up to speed it is difficult to get match fit.”

As for his 50th cap, De Jager has been part of some of the best and worst of the Boks in recent years, winning the World Cup and Rugby Championship in 2019, but also playing in shock defeats to Japan and Italy, and the 57-0 humiliation at the hands of New Zealand in 2017.

“I have been fortunate to experience some real highs of Springbok rugby, but there have been some real lows that I have been part of too. I believe everything happens for a reason,” he said.

State premier says it will be disappointing for fans if game is cancelled, ‘but that’s the nature of the world we’re in’
Sport
9 months ago