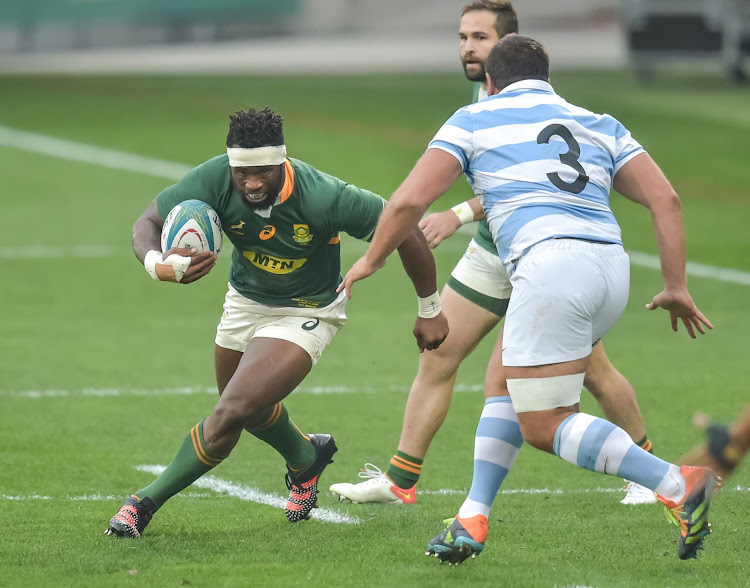 Though it was amazing to be back in his hometown, Gqeberha, it was tough not having fans in Nelson Mandela Bay Stadium to watch the Springboks beat Argentina, says captain Siya Kolisi.

The Boks started their Rugby Championship campaign with a 32-12 win over Los Pumas in a match that was played behind closed doors because of Covid-19 protocols.

SA fielded a new-look team against Argentina that included 10 changes to the starting line-up that beat the British & Irish Lions in their previous Test.

After starting on a winning note, Kolisi said the Boks want to finish the job next week in the second match of a double-header at the same stadium

“It is amazing being back in Gqeberha, but is tough not to have people come and watch us in the stadium,” he said. “But outside our hotel people came to support us and wish us well.

“It was beautiful to see, and I love our South African people. No matter how small, they always make that effort to be there and we want to say thank you to the people. It really means a lot to us, and we can’t wait for next week to finish strong.”

Kolisi said Argentina had been a tough nut to crack in a physical battle between the southern hemisphere rivals.

“We worked really hard to win this Test,” he said. “It was tough and it was a different challenge to the one we faced against the Lions in our previous match.

“It was good to see new guys getting an opportunity and I was glad we could come out with a win.

“When we play against southern hemisphere teams, it is a little more physical. Argentina challenge you in the breakdown, and in general they are very street smart and we have to be aware about everything we do.

“In the set piece, Argentina are very proud of their scrum and we play a similar sort of game. Both teams want to make sure they can kick, so it is all about who is going to get tired first or execute better.

“We have been working very hard as a squad and some guys have not been getting opportunities. The guys who were not playing were so important because they gave everything for the team during the Lions series.

“Elton Jantjies was playing like Finn Russell and Dan Biggar in training and that helped us quite a lot.”

Bok coach Jacques Nienaber said Kolisi had been a doubtful starter after suffering from a stomach bug in the morning but had decided, in conjunction with the medical team, that he was fit enough to play.

Kolisi said he had had every confidence ahead of kickoff in the Boks’ ability to cope with the changed line-up.

“The one thing I love about this team is that there are no senior players or anything like that, and everyone had their own job,” he said.

“If something goes wrong in the maul, at the breakdown or in the scrum we know who to look to to fix it. We were never in a panic today and we were in control a lot of the time.”

The Springboks scored tries through Cobus Reinach, Aphelele Fassi and debutant Jaden Hendrikse with Jantjies landing six out of seven kicks at goal with one conversion and five penalties.

The win put the Boks second to New Zealand in the Rugby Championship first-round standings on points difference.

The Boks’ 20-point advantage over Argentina was edged by New Zealand’s 35-point difference in their 57-22 win over Australia.