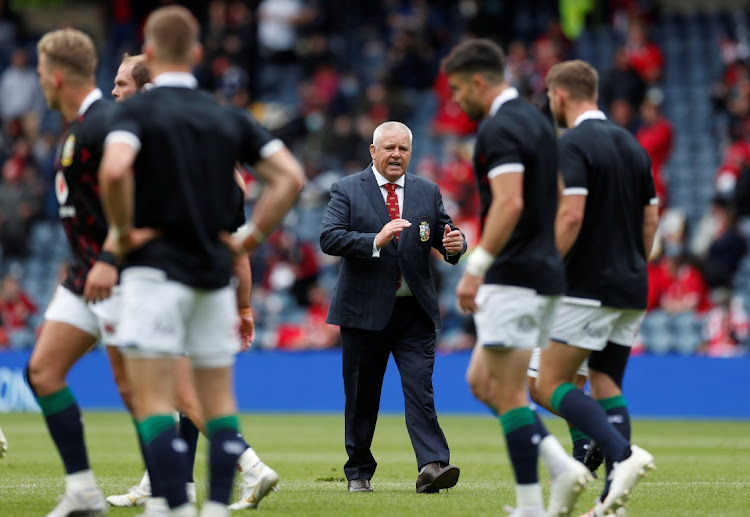 British and Irish Lions coach Warren Gatland during the warm up before the match against Japan at Murrayfield in Edinburgh, Scotland, June 26 2021. Picture: LEE SMITH/REUTERS

British & Irish Lions coach Warren Gatland is a long way off deciding his Test team for the three-match series against SA and is in no rush to get there.

Gatland still has four tour games before the first Test in Cape Town on July 24, having seen his side start their eight-week tour with a 56-14 win over the Gauteng Lions at Ellis Park in Johannesburg on Saturday.

“There is definitely no thinking about the Tests at the moment. We want everyone to have a turn in the first three games and then we might look at mixing and matching a little bit,” Gatland said after Saturday’s positive start to the tour where the Lions ran in eight tries and came through without any serious injuries.

“I don’t want to start looking ahead because we know how tough the competition in the squad is, in all positions. We’ve got a lot of players putting their hands up at the moment.

“We are kind of at the moment not trying to predict what a Test side is going to look like. We are going to just let that unfold, see how the players are competing and performing and how the combinations look.

“Then we’ll start looking at our options. I definitely don’t want to pigeon hole any player, or our thoughts at the moment. I’m keeping an open mind about how we play and how we keep improving.”

The Lions are next up against the Sharks on Wednesday, but one area of concern is being properly tested before the three-Test series.

Gatland was assistant coach when the Lions last visited SA: “In 2009 we didn’t come up against any of the Test players in any of the tour games and we were probably a little underdone when we got to the first Test, so we are going to work really hard at training and make sure we are at the tempo and have the physicality that is required.

“Hopefully some of the games will be a little bit harder but we understand there are a number of players out of their [franchise] sides because they are in with the Springbok camp,” he said.

Without Bok stars, regional outfits are less likely to reengage support like it used to
Opinion
3 weeks ago