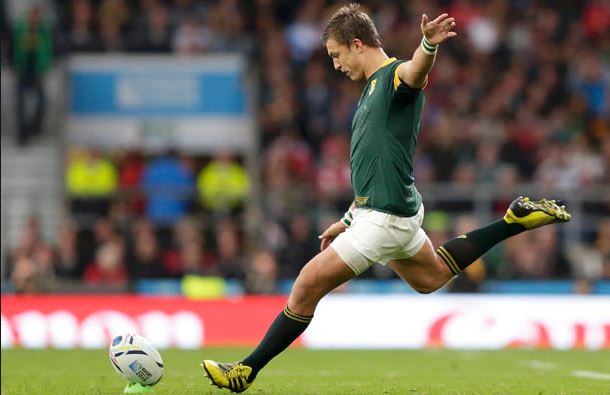 Springbok kicking machine Handré Pollard is eagerly anticipating a return to international rugby, having suffered a serious knee injury since winning the World Cup but still not missing a Test for the Springboks.

Flyhalf Pollard, whose boot helped the Springboks to the world title in 2019, is likely to again be a key factor in the forthcoming Test series against the British and Irish Lions. But his availability was in doubt until two months ago after an anterior cruciate ligament tear he suffered last September.

The 27-year-old only made a comeback to club rugby with his French club Montpellier in May, but he was named on Tuesday in the Springboks’ line-up for their first warm-up Test against Georgia in Pretoria on Friday.

“It’s massively special to be back in the team environment with your mates and the coaches. It’s a special group we have here, a special environment,” he said. “On a personal note, for a guy to tear his ACL and still not miss a Test match is a pretty good bargain,” he said.

Friday’s Test at Pollard’s old home ground Loftus Versfeld is the first for the Boks in 20 months after they beat England in the World Cup final, with last year’s Test programme abandoned because of the Covid-19 pandemic.

Pollard was the leading points scorer at the tournament in Japan, contributing 22 alone in the final in Yokohama with his accurate kicking.

“I’ve been working really hard getting over the injury and had a bit of playing time at Montpellier and then tough physical training with the Springboks. Physically and mentally I’m raring to go,” he told a Tuesday news conference.

Pollard has successfully bounced back from a previous knee ligament injury that caused him to miss most of the 2016 season, and in the same year he nearly had his arm amputated after picking up a hospital infection from a shoulder surgery. He fractured his eye socket in the 2019 World Cup final.

Pollard said a good performance against Georgia is imperative to keep up preparations for the Lions series. “There are no words to explain the excitement of playing the Lions, and we are just glad the series is going ahead. It is a once-in-a-lifetime opportunity.”

KEVIN MCCALLUM: A year later, it’s still a mystery how England lost to the Boks

KEVIN MCCALLUM: A year later, it’s still a mystery how England lost to the Boks