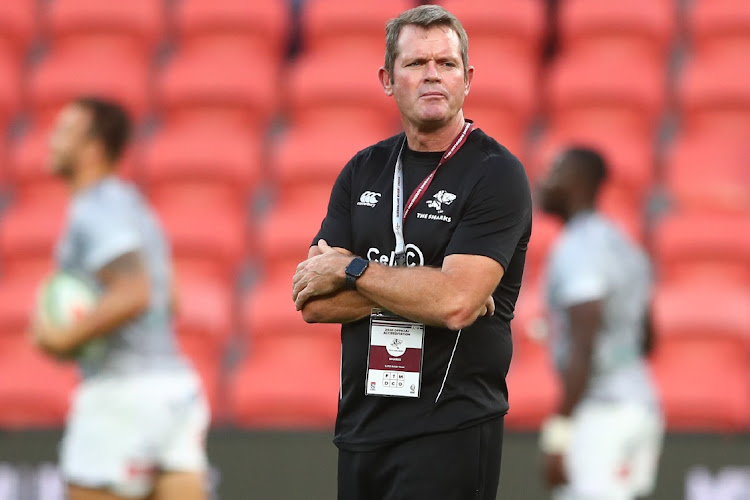 The Sharks set up a potentially thrilling climax to the Pro14 Rainbow Cup SA when they secured a bonus point win over the Lions at Ellis Park on Saturday.

Their 33-21 victory has earned them the right to go into the final league match with SA section honours still up for grabs against Jake White’s pacesetting Bulls team.

Though they had to make sweeping changes to their team those called on to deputise rose to the occasion and may give coach Sean Everitt much to ponder before he selects his team for the crunch game.

The odds are of course still stacked against the Sharks who have to win with a bonus point and deny the Bulls a bonus point. The Bulls have a far superior points difference.

On the evidence of what they produced at Ellis Park that possibility should not be discounted.

The Sharks rode an early storm, conceding just one try in a period of sustained Lions’ dominance but once they got out of their half the game changed.

That unremitting defence will be a key ingredient if they are to upstage the Bulls next week.

Equally‚ if not more important will be the ruthlessness in attack they have displayed at times this season. They are a compelling force when the passes start to stick and few defences are able to keep up when the Sharks transition to attack.

The Ellis Park defeat will have been hard to swallow for the Lions, who had hoped for a better outcome. The Lions missed the urgency and vitality that helped carry them to victory over the Bulls in their previous outing.

To compound matters their set piece went to pieces particularly in the line-outs where they were pressed into an eleventh-hour change at hooker.

“We were disappointing. Not sharp enough. We lost a lot of small moments‚” said coach Ivan van Rooyen. “The Sharks out-rucked us and our set piece didn’t function in the first half, which put us under pressure. We played for about 20 minutes in our own 22.”

To add insult‚ star flanker Vincent Tshituka left the field after sustaining a significant blow to the head when he tried to execute a tackle. Promising flyhalf Jordan Hendrikse was also in the wars.

“It looks like concussion [for Tshituka] and Jordan got a shot on his knee. He will go for scans. We’ll wait 48 hours and get feedback then‚” said Van Rooyen.

With the Lions’ interest in the competition long gone Van Rooyen said they may consider spreading game time in the squad by making changes for next week’s clash against the Stormers in Cape Town.