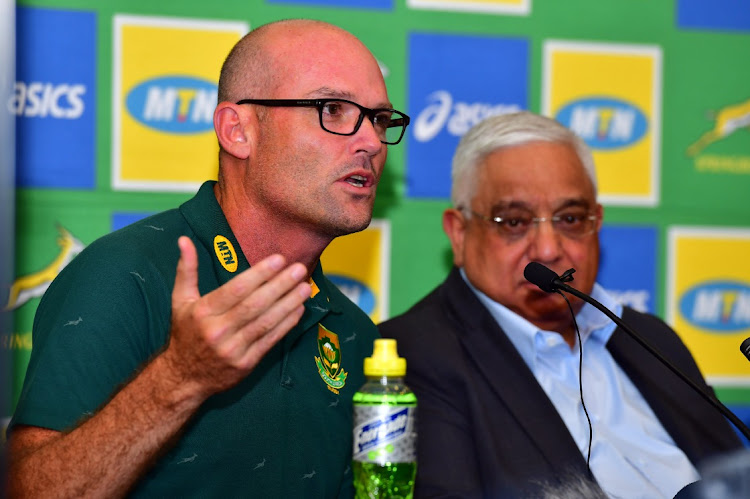 Springbok coach Jacques Nienaber says reputations will not count for much when the teams to play against Georgia and the British & Irish Lions are selected.

SA Rugby announced the 46-man squad on Saturday and it included 29 Rugby World Cup winners and eight uncapped players. The team will play two Tests against Georgia in July and three Tests against the British & Irish Lions on July 24 and 31 and August 7.

Nienaber said the players who will get the nod are those who give the hard yards at training, and final selection will not be based on whether they are playing overseas or played at the World Cup.

“If a guy knocks the door down because he is training well and the other guy is getting a little bit of entitlement‚ it is no reason for the one who is working hard and producing at training‚ but maybe doesn’t have a cap under his name‚ to be [overlooked]‚” he said.

“We will have to go into training and see how the guys go‚ how the overseas guys fit into the structure again and how they pick on what we want to do. Obviously‚ I worked with them for 22 weeks in 2019 and hopefully they will get into the mix as quickly as possible because they have been selected on form.

Nienaber said the good thing for the Boks think-tank is that most of the players who won the World Cup in Japan have been active and are doing well at their respective clubs.

“I think it will be stupid to say the guys who played at the World Cup are now second best or third best‚ they have been there in the past and they are playing well.

“I must say, the guys who have been selected and have been to the World Cup have been playing well‚ and they are working hard.

“We put them in the alignment camps where we engaged and gave them feedback with things that they must work on and intervention plans in their games‚ and we can see immediate improvements.

“I won’t say this is the A or the B side. It is a squad and the guys who are going to play‚ we will filter them as we go into the six weeks leading up to the British & Irish Lions series.”

Nienaber said the door is not completely closed on players such as JD Schickerling‚ Lizo Gqoboka‚ Marcell Coetzee and Curwin Bosch‚ who have opportunities of playing against the British & Irish Lions for the franchises.

“A player like Marcell‚ I think he last played against Leinster on March 6. His appearance for the Bulls against the Stormers on Friday was literally his first game back on week 13 after his injury.

“That is the home-ground advantage that we have with regards to a guy like Marcell, who is playing in SA. He can play next weekend‚ he can play in the Rainbow Cup SA final if the Bulls make it and he can play a game against the British & Irish Lions for the Bulls‚ and we might get injuries.

“Hopefully that doesn’t happen‚ but guys like that can still make the squad.”

The Brits and Irish are coming to SA, and no one can predict what is going to happen
Sport
4 months ago

Stormers head to Loftus hoping to knock Bulls off their perch

Stormers head to Loftus hoping to knock Bulls off their perch