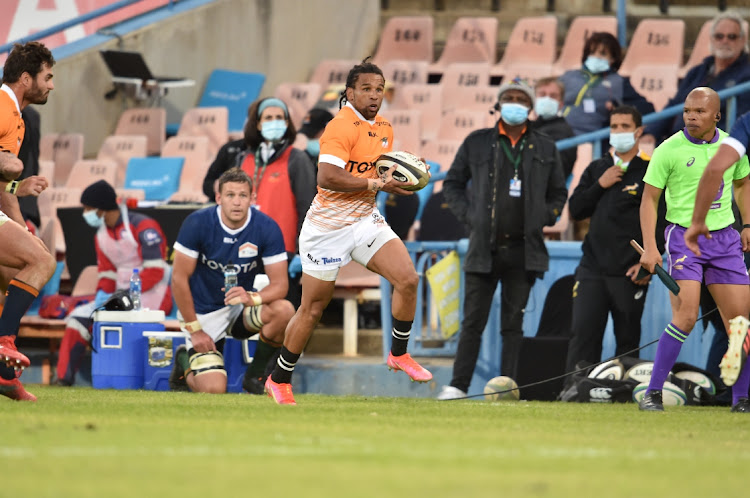 Rosko Specman of the Toyota Cheetahs on May 29, 2021 in Bloemfontein. Picture: GALLO IMAGES/JOHAN PRETORIUS

“He has come in and fitted like a glove‚” Stormers’ assistant coach Labeeb Levy enthused about the arrival of the on-loan Rosko Specman.

With his Cheetahs team out of competition‚ the elusive wing will be getting game time at the Stormers in a temporary move that is entirely symbiotic.

With Seabelo Senatla suspended for several weeks after the red card he got against the Sharks at Newlands‚ the Stormers have been a game breaker light in their back three‚ but there is also a bigger picture.

“There was also a requirement from SA Rugby to give a player like him a chance‚” said Levy about Specman. “He is in the SA squad and needs game time and we want to capitalise on that.”

He then pointed to the near seamless transition Specman has made since joining the squad on Monday.

Centre Rikus Pretorius is similarly stoked to have the try-scoring dynamo wearing the same jersey.

“He doesn’t give up. It is great to see his skill set in training. His communication is flippin good. He gives you options through his communication. He will tell you exactly what he needs‚” said Pretorius.

Whether Specman will get a run when the Stormers play his former team‚ the Bulls‚ at Loftus on Friday‚ remains to be seen. They appear to be preparing for a significant shift with Damian Willemse getting a run at flyhalf in training this week.

Incumbent Abner van Reenen is some way from making the position his own and Willemse may well be deployed at 10 as the Stormers seek a win over the Bulls that could bring them level on the points table.

“Anything can happen in a game‚” reminded Levy. “Abner has been running there‚ and [also] Damian. We have to go prepared if we need to adjust. We toyed around with Damian at 10. Obviously Tim Swiel as well. It is a discussion point‚” said Levy about their choice of flyhalf for Loftus.

Moving Willemse to first receiver will represent a throw of the dice for the Stormers as they hope to bring more dynamism and ruthlessness to their attack. They need wins over the Bulls and Lions to potentially clinch top spot in their section and a place in the Rainbow Cup final.

Levy, however, talked down the significance of their remaining two games. “We know we still have an outside chance but the Rainbow Cup final is not our be-all and end-all. That is not why we are playing these last two matches. We want to get better.

“The squad has shown promise over a long time that we can reach our potential. We showed in glimpses that if we apply ourselves we can get it. We are on an upward curve and we want to continue that.”

Head coach John Dobson has no doubt the tough, versatile players have a lot more to offer
Sport
4 months ago