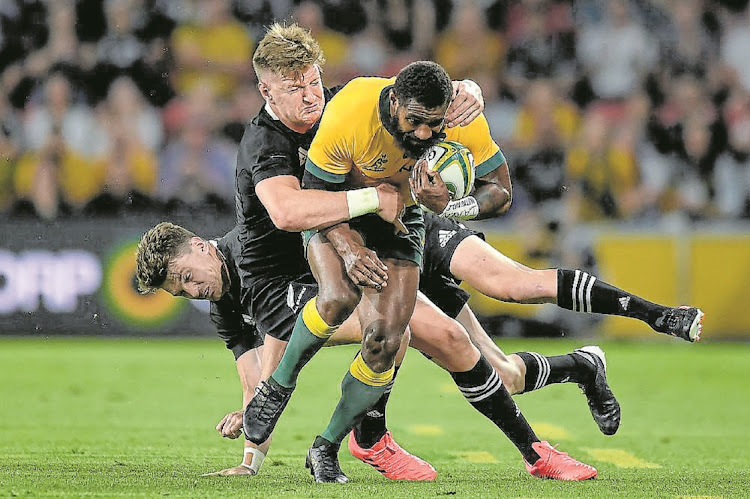 Marika Koroibete of the Wallabies is tackled during the 2020 Tri-Nations match between Australia and New Zealand at Suncorp Stadium on November 7 2020 in Brisbane, Australia. Picture: A GETTY IMAGES/ALBERT PEREZ

Sydney — Australia are preparing for a mighty battle of the back rows when they face Argentina in the Tri-Nations on Saturday after the Pumas dominated the tackle area in their maiden victory over the All Blacks last weekend.

The Pumas played an almost perfect game against New Zealand on Saturday but their ability to slow down, and sometimes poach, All Blacks ball at Western Sydney Stadium particularly caught the eye of Wallabies loose forward Liam Wright.

“They attack the breakdown quite well,” Wright told reporters on Monday. “As we know with Argentina their hookers are actually quite good over the ball as well ... they’ve essentially got four backrowers there who are constantly looking for that ball.”

Wright is a contender to replace Lachie Swinton in the back row for Saturday’s match in Newcastle as the New South Wales flanker serves a ban for the red card he was shown on debut in Australia’s win over New Zealand two weeks ago.

Reds captain Wright skippered an Australia XV that played the Pumas in warm-up before the All Blacks game and he said the Wallabies would need to get their bodies nice and low when carrying the ball into the tackle on Saturday.

“Their second rowers like to slow the breakdown by dominating the tackles and holding people up. For us to get quick breakdown ball we’ll have to target their back row, definitely,” he added.

“Just make sure we’re getting good collisions and dominating that contact battle for the carry. Otherwise it’s just going to be a long day, they’re going to slow up our ball and make it hard to get any go-forward.

“We’ve got to be wary of our body height and making sure we’re not going in too high, otherwise they’ll have a field day on us.”

Leading lights benched by coach John Dobson, who hopes for home side advantage
Sport
8 months ago
Next Article