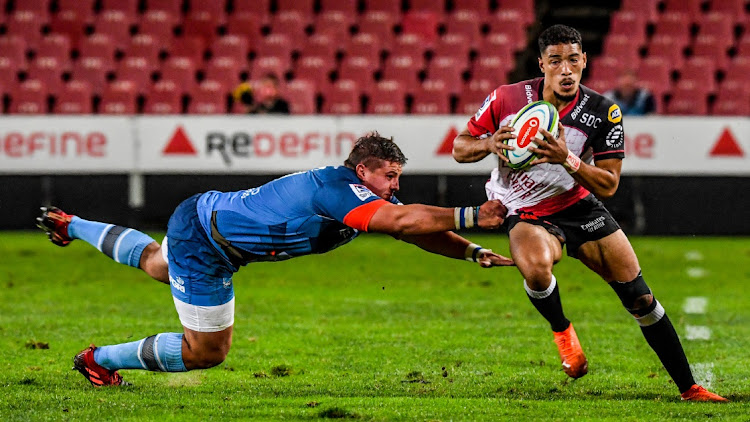 Gianni Lombard of the Lions and Joe van Zyl of the Bulls during the Super Rugby Unlocked match at Emirates Airline Park on November 7 2020 in Durban. Picture: GALLO IMAGES/SYDNEY SESHIBEDI

Gianni Lombard’s career has been chopped at the knee again just as it was starting to soar.

The highly gifted Lions’ utility back suffered an anterior cruciate ligament (ACL) fracture in their defeat to the Bulls last Saturday and he is likely to be out for nine months.

He will be seeing a specialist this week for surgery but the remainder of the season will be lost to the 22-year-old fullback-cum-flyhalf.

The injury comes at a terrible time for Lombard who was starting to leave an imprint on the domestic landscape. He has already injured an ACL, and a medial cruciate ligament, against the Chiefs in 2019. The latest ACL injury is on the other knee and similar to the knock he suffered last year. He returned from injury in time for the reboot of the season after lockdown restrictions were lifted‚ but now he is heading back for the operating theatre.

The former SA Schools and Junior Springbok playmaker was starting to make waves in the senior ranks and even earned a call-up to the Springbok Showdown clash at Newlands upon the resumption of the season. There too he delivered an eye-catching performance and continued playing with competence and confidence for the Lions.

Since the departure of Shaun Reynolds‚ Lombard has been operating as understudy to Elton Jantjies‚ offering greater off-the-line thrust and a trusty right boot.

In his absence EW Viljoen is likely to take over the No 15 jumper this Saturday when the Lions play the Pumas in their final Super Rugby Unlocked clash.

The Lions will look to finish the competition with a bang not just to restore pride and confidence but to carry log points into the Currie Cup that starts later in November.

Team captain Jantjies says the Lions can improve their composure.

“We are busy with a process but I think we can improve on small moments. That cost us in our discipline. The boys were right up there physically. We’ve had a few mental patches‚” he said after the Lions’ defeat against the Bulls‚ but he might as well have been referring to their earlier defeats to the Stormers and Sharks.

“Experience will help but that is not an excuse. It is something we can fix quickly. When you concede maul penalties‚ that is in your control. Offside penalties as well.”

Mentor says despite the pain of losing, they are proud of the character shown by the players
Sport
8 months ago