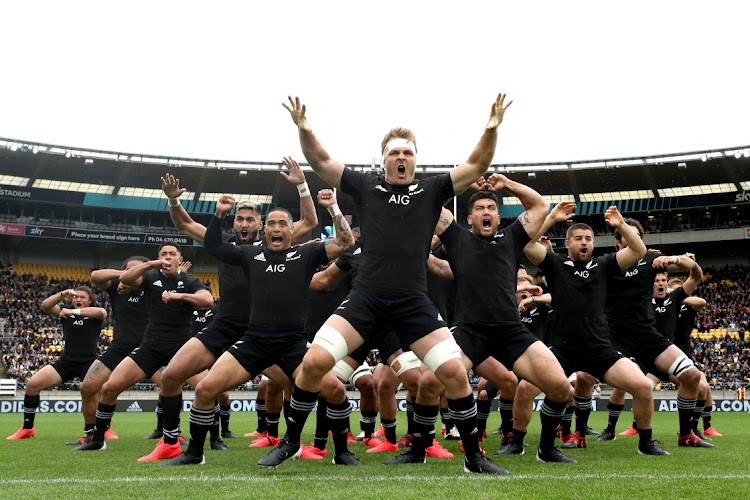 Sam Cane of the All Blacks performs the haka ahead of the Bledisloe Cup match between New Zealand and Australia at Sky Stadium in Wellington, New Zealand on October 11 2020. Picture: PHIL WALTER/GETTY IMAGES

Melbourne — With confidence rocked, credibility shot and injuries piling up, the Wallabies head to Brisbane for the second Tri-Nations clash on Saturday with few bullets left to fire at an All Blacks team at the top of their game.

Dave Rennie’s honeymoon as Australia coach ended abruptly with last Saturday’s record 43-5 defeat in Sydney, and any remaining goodwill towards the New Zealander could vanish with another stinker at Lang Park.

With the Bledisloe Cup safe in New Zealand hands for an 18th successive year, the 16-16 draw with the All Blacks in Wellington a month ago now looks more of an aberration than the first promise of a new era in Australian rugby.

Australia’s lack of depth was ruthlessly exposed at Sydney’s Olympic Stadium where backline rookies Noah Lolesio and Irae Simone suffered a torrid debut in place of the experienced James O’Connor and Matt Toomua.

The depth challenge was also apparent on Thursday as Rennie unveiled his team for Lang Park, punting Lolesio to the bench and installing Reece Hodge for just his second Test at flyhalf in one of six changes to the starting side.

The back row has been reshuffled three times in four weeks, with captain Michael Hooper to line up with debutant Lachlan Swinton and three-test No 8 Harry Wilson.

Rennie’s calls to “treasure the ball” after the 27-7 loss at Eden Park in Bledisloe II appeared to have fallen on deaf ears in Sydney, with possession squandered with alarming regularity.

“The frustration is that we’ve lacked the patience, communication and accuracy to expose [the All Blacks],” Rennie told reporters on Thursday. “We need to be at our best to knock the All Blacks over and we need to apply pressure to them so they’re not at their best.”

While the Wallabies have built a dreadful record against the All Blacks in Sydney in recent years, Lang Park has been a comparative fortress, with two wins, a draw and a tight loss in their last four tests against the New Zealanders.

All of those results came with the heat gone from the Bledisloe series, however, and the cup secured by the men in black. The Tri-Nations silverware remains up for grabs but All Blacks coach Ian Foster has elected to rest a number of players, including left-wing wrecking ball Caleb Clarke and flyhalf Richie Mo’unga.

Akira Ioane gets a long-awaited Test debut after being named at blindside flanker, joining his brother Rieko who replaces Clarke. Uncapped loose forward Cullen Grace, hooker Asafo Aumua and utility back Will Jordan could debut from the bench.

Foster, overseeing his fourth Test like Rennie, said he expected the All Blacks to keep raising their game.

“It’s a real focus for the team to keep lifting the performance, I know it’s tough but that’s what being an All Black is about,” he said.

To play 100 games for Australia is an honour, says James Slipper
Sport
11 months ago

SA commits to Rugby Championship for next decade