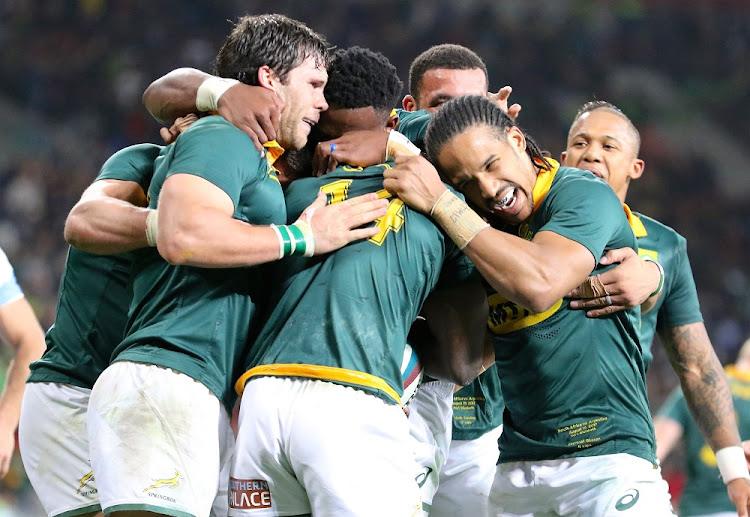 The Springboks look set to defend their Rugby Championship crown in November and December.

World Rugby has announced proposed dates for a revamped international calendar and it includes a slot from November 7 to December 12 for the Rugby Championship to be contested.

The staging of the proposed five-week tournament is‚ however‚ contingent on external factors such as travel restrictions and quarantine regulations. The entire tournament is likely to be played in New Zealand, which is less afflicted by the coronavirus.

But the revamped schedule means there will be no end-of-year tour for the Springboks‚ the All Blacks‚ the Wallabies and Los Pumas as that slot had to be reallocated.

The remaining Six Nations matches will be played in the last two weeks of October before attention shifts to the traditional autumn internationals in November. The Boks and their southern hemisphere rivals will be engaged in combat against each other at that time.

End-of-year tours do not generate funds for the visiting unions and not travelling north may be a way of limiting their losses. The autumn matches are likely to be all-European affairs, but a team consisting of players from the Pacific island nations who ply their trade in Europe could potentially crack the nod.

To facilitate all this, World Rugby’s council will make a temporary change to the rules governing players’ release‚ which will oblige clubs to make players available for the entire block which, in effect, amounts to two Test windows.

“The rescheduling means clubs will have access to their star southern hemisphere players for the completion of their seasons, when they would ordinarily have been on international duty‚” World Rugby said in a statement.

“Recognising the importance of a balanced and shared compromise among all stakeholders‚ a temporary international window between October 24 and December 5 has been recommended.”

The revamped calendar as recommended by World Rugby’s executive committee requires rubber-stamping by its council on July 30.

Dobson was always willing and quick to share his vast knowledge of the game, whether it was about coaching‚ refereeing or statistics
Sport
11 months ago