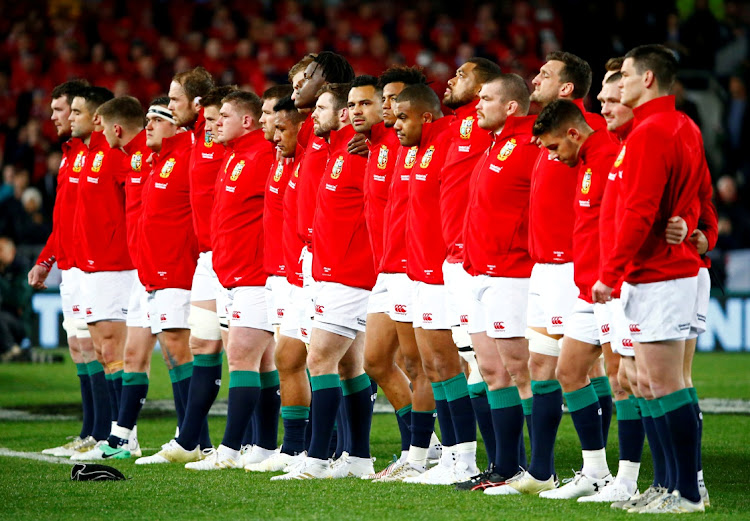 Lions players line up before a match againt the All Blacks in this June 24 2017 file photo. Picture: REUTERS/David Gray

SA Rugby is desperate to host the British and Irish Lions in 2021 and has confirmed it is even prepared to change the dates for the tour.

The keenly awaited tour takes place every 12 years and 2021’s visit by the team made up of the Home Unions is seen as a lifeline for SA Rugby, which is already hard hit  by the storm the Covid-19 pandemic brought to the country’s shores.

SA Rugby last week reported a taxed profit of R8.5m for 2019. But that  does not take into account the severe disruption the coronavirus pandemic has caused to its business in 2020.

SA Rugby CEO Jurie Roux confirmed a later time slot than the July 3-August 7 one was being considered together with other Test scheduling discussions taking place with World Rugby.

“We have those scenarios in place‚ but the main question now is when it will be safe for international travel and for mass gatherings. It would be a disappointment if a Lions series had to be played behind closed doors‚ but that is not a scenario for which we are currently planning‚” said Roux.

Playing behind closed doors would be a scenario almost too ghastly to contemplate.

A Lions tour can attract upwards of 30,000 travelling spectators who bring much-needed foreign currency into the local economy.

A bigger concern is the return of international rugby to the country in August, and Roux explained a range of possibilities for the return to Test rugby.

“There are ... options. The postponed July Tests [against Georgia and Scotland] could still take place here in October. Our northern hemisphere tour in November has not been cancelled, and the possibility of playing the Rugby Championship in a single venue in ‘a bubble’ has also been workshopped.

“But those all remain unconfirmed and are reliant on factors outside our control. But we also have a few other ideas up our sleeve which we’re quite excited about and will announce if and when they become necessary.”

World Rugby and its affiliates have been discussing the potential for a global calendar with greater urgency than ever. The idea has been around a long time but always lacked a catalyst to get the various parties to make it happen.

“The pandemic has had the side effect of wiping the slate clean when it comes to Test scheduling‚” said Roux.

“It has created the necessity of finding solutions for exceptional circumstances in 2020 and reopened questions about what works best from an audience and player welfare perspective.

“There are some very interesting ideas being discussed and SA Rugby would be keen to see this pandemic have some positive spin-offs in terms of realignment.”

Roux said while nothing has been ruled out‚ it is too early to draw conclusions on SA teams joining the PRO14 competition.