Thousands of South Africans screamed with joy, danced and sang at Johannesburg’s OR Tambo airport on Tuesday as a first group of Springboks who won the Rugby World Cup returned home.

Forward Pieter-Steph du Toit, voted World Rugby Player of the Year two days ago, and scrumhalf Faf de Klerk were among the first players to arrive. The victorious squad, coaches and officials are scheduled to return between Tuesday and Wednesday as no airline could accommodate the entire group on one flight.

Captain Siya Kolisi and coach Rassie Erasmus are among a group expected to arrive in Johannesburg later Tuesday. A carnival atmosphere enveloped the normally sedate international arrivals section of the airport as Du Toit, De Klerk and some teammates and coaches received deafening applause.

Black and white, male and female, young, middle aged and old, low-income earners and the wealthy all descended on the airport east of Johannesburg to salute their heroes. Many wore replica green and gold shirts and waved national flags as they celebrated the rugby triumph, which was all the sweeter after poor recent results by the national football and cricket teams.

The Springboks dominated and then crushed pre-match favourites England 32-12 in the Japanese city of Yokohama on Saturday to lift the World Cup a record-equalling third time.

Winning the four-yearly showcase of rugby so decisively has lifted the spirits of a nation mired in economic and social quagmires. 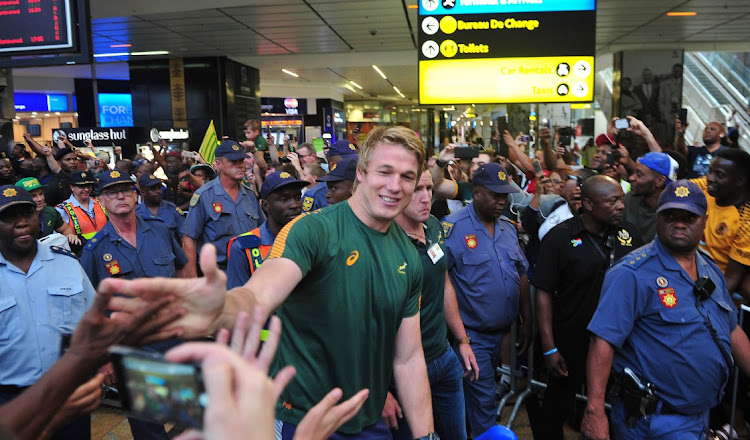 Rosharon Morgan, a 34-year-old from western Johannesburg, said she closed the family engineering business for the day in order to welcome the Springboks.

“I’m here because the Springboks are the pride of the nation,” she said. “I was listening to the speeches of [captain] Siya Kolisi and [coach] Rassie Erasmus and they were along the lines of uniting us and giving us hope.

“Right now there is a lot of euphoria in the county, but what we need to do is turn that into tangible changes. The problem is that we are not working towards [racial] unity.

“There are still many issues that need to be addressed, such as racial and economic inequalities. We cannot overlook them.”

Moemedi Mashiolane, 45, works in the security industry and took advantage of free train transport to join the celebrations.

“I came here because this is Nelson Mandela’s legacy — this is what he would have wanted,” he said. “Rugby has united us. Where I come from rugby is a sport played by white people but today it has united us.

“We want white people to know that we want to be part of rugby and they must allow us to play the game.”

Mashiolane said he loved the speech Kolisi made about unity as it uplifted his spirits.

“He knows about our lives as black people and I hope politicians learn from that. They must not think we are stupid — we can see they are trying to divide us.”

What made the Springboks’ success special was it being achieved with a team reflecting both racial groups with nine whites and six blacks in the starting line-up.

The team was captained by forward Kolisi, who in 2018 became the first black Test captain in SA history.

Formed in 1891, the Springboks fielded only whites for 90 years before flyhalf Errol Tobias became the first black player to represent his country. Just one black player, winger Chester Williams, featured in the 1995 World Cup-winning side and there were two black wingers, JP Pietersen and Bryan Habana, in the side that conquered the world 12 years later.

Despite government pressure for the Springboks to select teams that better reflected a population that is 90% black, many coaches chose predominantly white teams.

Erasmus turned the tide after replacing embattled Allister Coetzee as coach in 2018, giving a string of black stars opportunities.

Kolbe was a candidate for the World Rugby Player of the Year award, which was won by Du Toi. Mapimpi was the second-highest try scorer at the World Cup with five.

Springboks prepare for delirious crowds at street parades around SA

Why the Springboks’ win is about so much more than rugby

Winning the World Cup has given SA a chance to unite to address deep and growing economic, financial and social challenges
Opinion
9 months ago

‘Let’s be realistic’, Jordaan says of Boks versus Bafana debate

Why Temba Bavuma looks up to Springbok captain Siya Kolisi

‘Let’s be realistic’, Jordaan says of Boks versus Bafana debate

Why Temba Bavuma looks up to Springbok captain Siya Kolisi