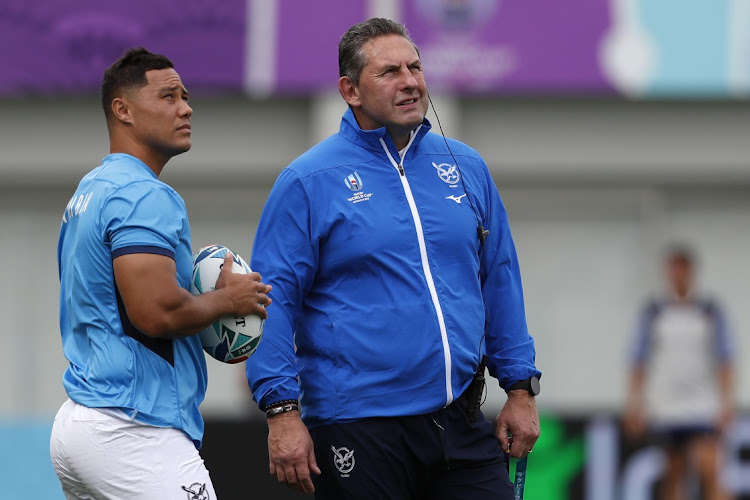 Toyota City  — Namibia owe much of their growth as a rugby nation to the input of neighbours SA, but come Saturday and they will be plotting a shock win over the Springboks in their Rugby World Cup Pool B clash at the City of Toyota Stadium.

The match pits Namibia against their “big brother” in what should be a mismatch, but does highlight the strong rugby ties between the two nations. Many of the Namibia squad were born, schooled or studied tertiary education in SA, while others developed their skill through the country’s domestic rugby system.

SA Rugby has for many years offered technical and coaching support to their Namibian counterparts, but they will now hope that good faith does not come back to bite them on Saturday.

“Since my time in Namibia, which has been five years, they have been fantastic. I don’t think we could ask for more,” Namibia coach Phil Davies said on Thursday.

“The last World Cup we had help from [former Springbok coach] Heyneke [Meyer] and his team. This time we had a camp in Durban with the Sharks and [defence coach] Michael Horak. They were very helpful.”

But it has been the introduction of Namibia’s Welwitschias into SA’s domestic competitions that has made the most difference, according to former Wales international Davies.

“Playing in the Currie Cup, Vodacom Cup and SuperSport Challenge has been fantastic for the home-based players. Seventy percent of our team is based in Namibia, and a lot of the growth in them has to do with the support SA Rugby have given.

“The young players in Namibia have grasped the opportunity. The scoreboard has maybe not been kind at times, but the effort and commitment the players have put in is exceptional.

“I can’t speak highly enough of their support of Namibia rugby.”

The opportunity to play against professional teams on a regular basis has helped Davies to grow a new generation of players for Namibia.

“When we went to the last World Cup [in 2015], the average age of the team was 31. For this tournament it is 24, so the challenge for Namibia now is to retain those players and build on the momentum for the next cycle.

“It’s important the game grows and for that we need to get more people playing rugby. The [development] programme from World Rugby needs real focus to get from 900 players to 4,500. The club game can go from six clubs to 10 clubs that are competitive.

“We need a really strong domestic competition to marry with the Currie Cup or SuperSport Challenge. That will give us a stronger national team.”

It has not all been a one-way street though. Percy Montgomery, who kicked the Boks to the 2007 World Cup title, was born in Namibia’s Walvis Bay, though later schooled in Cape Town.

Bok centre Jesse Kriel out of Saturday’s clash against Namibia

Five facts about Boks vs Namibia

Five facts about Boks vs Namibia