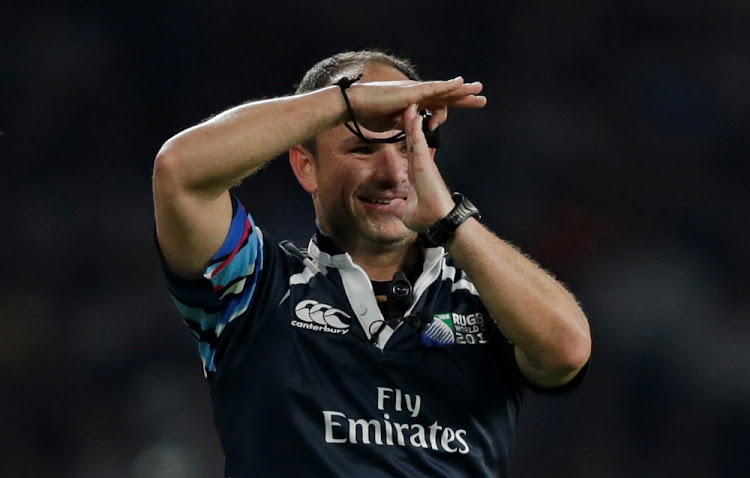 Jaco Peyper will be SA’s sole referee at Rugby World Cup (RWC) 2019 in Japan after the list of officials was released by World Rugby.

Marius Jonker will attend the tournament as a specialist television match official (TMO).

Peyper is part of the 23-person squad of match officials selected to take charge of the 48 matches‚ which runs from September 20 to November 2.

“Team 21” has 804 Tests under its collective belt‚ as either referees‚ assistant referees or TMOs.

This will be the second RWC tournament appearance for Peyper‚ who made his debut appearance at the 2015 edition in the UK. He recently became only the fourth referee in history to officiate in 100 Super Rugby matches when he was in charge of the Trans-Tasman clash between the Crusaders and Brumbies in Christchurch.

Peyper has handled 46 Test matches‚ including the series between the All Blacks and British & Irish Lions in 2017.

In 2018 he was named SA Referee of the Year for a third time. He refereed his fourth Currie Cup final in Cape Town in 2018.

Jonker made his debut at first-class level in 2003 and quickly rose to take charge of his first Test match in 2005. In all‚ he refereed in 24 Test matches, the last of them in 2011, and was also a member of the officials’ panel at the 2007 RWC Cup in France.

Though he retired from refereeing in 2014‚ he continued to be part of the refereeing community as a TMO.

Mark Alexander‚ president of SA Rugby‚ congratulated Peyper and Jonker on their appointments.

“The Rugby World Cup is the pinnacle event of our sport and to have two of our officials on the refereeing panel is a very good achievement‚” said Alexander.

Anthony Buchanan‚ World Rugby’s match official selection committee chair‚ added: “The group selected for Rugby World Cup 2019 contains a strong mix of experience and proven young talent and we have every confidence that they will be well prepared and ready to perform at the highest possible level at Japan 2019.”

SA Rugby achieved 60% of the targets agreed with the department of sport & recreation, while 11 out of 19 sporting bodies failed to make the cut
Sport
2 years ago

More injuries among top Springbok players a headache for Rassie

Alarm bells ringing for Bok coach Erasmus with injuries to Du Toit, Kriel and Whiteley
Sport
2 years ago
Next Article

England give junior Boks a lesson

Ambush marketing at rugby fest is not cricket

England give junior Boks a lesson

Ambush marketing at rugby fest is not cricket