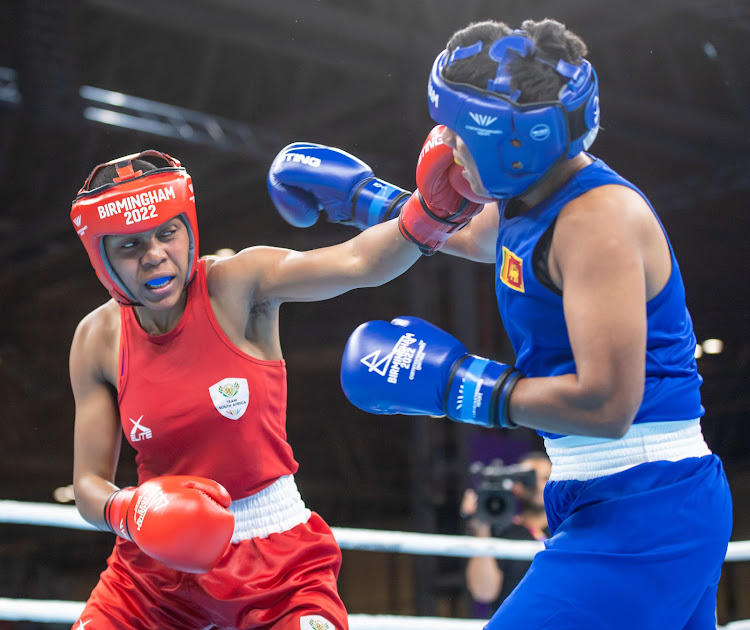 SA’s Phiwokuhle Mnguni in action during the quarterfinals of the women’s featherweight fight on day seven of the 2022 Commonwealth Games in Birmingham. Picture: ANTON GEYSER/ GALLO IMAGES

Mnguni, who had a bye straight into the quarterfinals, dominated Sri Lankan Sajeewani Coorey Muthuthanthri on Thursday before winning their featherweight contest by stoppage in the third round.

She will be one of two SA boxers in Birmingham to make the podium after East London-based Simnikiwe Bongco won his middleweight quarterfinal bout on Tuesday.

The colour of their medals has yet to be determined, but in boxing both losing semi-finalists are awarded bronze.

Mnguni, from Dundee in KwaZulu-Natal, started the fight well, counterpunching and picking her opponent off comfortably, before pushing the attack and landing better punches.

She was warned a couple of times for slapping, but she also delivered some hard blows such as a jarring left jab that sent her opponent stumbling backwards.

Muthuthanthri was subjected to two standing eight counts, and the referee waved it over after the second.

SA has never had a woman boxer make the podium at this level.

Amateur boxing, now known as open boxing because it allows an element of professionalism, has flailed in SA in recent years, delivering just one bronze from the previous three Games.

At the three Games before those, however, fighters brought home six medals, including a gold at Melbourne 2006.

Amateur boxing was SA’s richest source of Olympic silverware before isolation in the early 1960s, with 19 medals in total, but since readmission in 1992, no SA boxer has won more than a single fight at the Olympics.

SA boxers have not even got to the past two Olympics.

Ahead of Tokyo 2020, the administration failed to send a team to the African qualifying tournament.

By Thursday afternoon, SA was lying sixth on the medals table with 20 gongs. Mnguni and Bongco will add at least two more to the tally.

They will fight in their semifinals on Saturday.

Mnguni will face Michaela Walsh of Northern Ireland, a two-time Commonwealth Games medallist who has also made the podium at European tournaments.

If Thursday’s cricket match between the SA women and Sri Lanka had been a boxing contest, it would have been a first-round knockout.

Nadine de Klerk took three wickets for seven runs as Sri Lanka collapsed to 46 all out in the 18th over, their lowest total. They were two wickets down for one run and five down for 18.

Openers Tazmin Brits (21 not out) and Anneke Bosch (20 not out) steered SA to their first victory of the Games, by 10 wickets, in the seventh over.

On the athletics track, Ryan Mphahlele advanced to the men’s 1,500m final as a fastest loser after finishing his heat in seventh place in 3min 42.92sec.

And SA hockey women were beaten 4-1 by New Zealand, conceding three goals in the opening quarter.