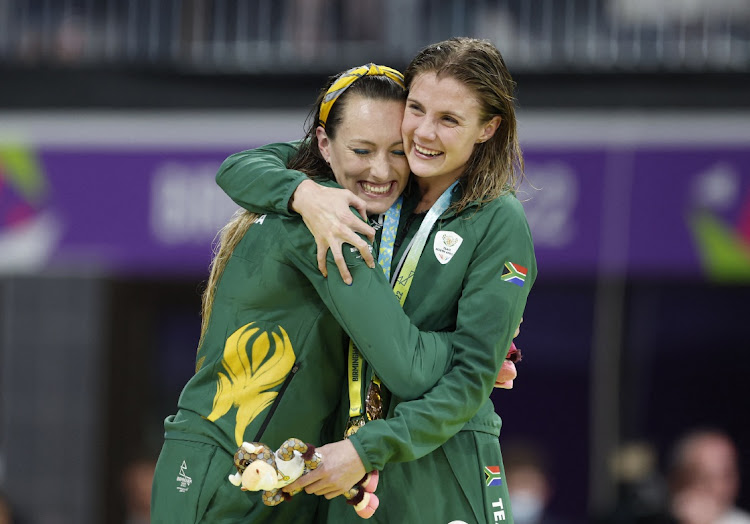 SA’s gold medallist Tatjana Schoenmaker, left, celebrates on the podium alongside Kaylene Corbett, who won bronze, during the medal ceremony for the Commonwealth Games’ women's 200m breaststroke at the Sandwell Aquatics Centre in Birmingham on Sunday. Picture: REUTERS/STEFAN WERMUTH

She may be an Olympic champion — and now two-time Commonwealth 200m breaststroke winner — but Tatjana Schoenmaker admitted a lack of support meant her build-up to the Games was far from ideal.

With SA dealing with ongoing load-shedding just a few weeks before the Games, Schoenmaker and Gqeberha-born bronze medallist Kaylene Corbett had to shift their training base from Tuks’ outdoor 50m pool to a 25m indoor pool because of the plummeting water temperature.

“It did 100% challenge our preparation,”  Schoenmaker said. “We’re obviously used to training outside in the 50m pool so three weeks out we had to change to short course.

“Obviously, we were blessed to be practising our turns more, so our turns probably improved,” she said, laughing, “but it does make a difference.

“We were hoping for some support. Unfortunately, we didn’t get the support we needed, but that’s why we just gave our best with what we had and we still did it.”

Had the competition been tougher, the podium could have looked very different.

“We needed generators for our pool to be able to function to keep it heated throughout the winter and this is the second year we’ve struggled with it,” Corbett said.

“We struggled before Tokyo as well.”

Schoenmaker added: “We were grateful that Tuks was able to help us before Tokyo, but they can’t carry on with those funds so we’re obviously looking for outside funds.”

Meanwhile, Schoenmaker and Corbett, as well as compatriot Lara van Niekerk, who claimed gold in the 50m breaststroke, were back in the pool on Monday for the 100m breaststroke heats.

Van Niekerk and Schoenmaker won their heats in 1:06.40 and 1:07.10, respectively, to go through to the semifinals as the top two qualifiers.

Corbett finished second in her heat in 1:08.12 and progressed as the eighth quickest.

Meanwhile, Springbok Sevens coach Neil Powell praised all 13 members of the Blitzbok squad for their superb performance on Sunday night, which culminated in a victory over Fiji at Coventry Stadium.

The South Africans scored five tries to one, dominating the Fijians from the outset, with Muller du Plessis dotting down twice while JC Pretorius, Shaun Williams and Mfundo Ndhlovu also crossed the whitewash for the Blitzboks in their 31-7 victory.

Powell said it was important for the team to regroup after their disappointing performances at the HSBC World Rugby Sevens Series events in Toulouse and London, where they failed to reach the semifinals after winning the first four tournaments of the 2022 season.

“I’m probably more relieved than anything else and really proud of the boys. They put in a huge effort — not only in the final against Fiji, but in all six games over the weekend,” Powell said.

“It’s amazing to have won the gold medal again, like we did eight years ago in Glasgow, and especially after we finished fourth at the previous Commonwealth Games in Australia.”