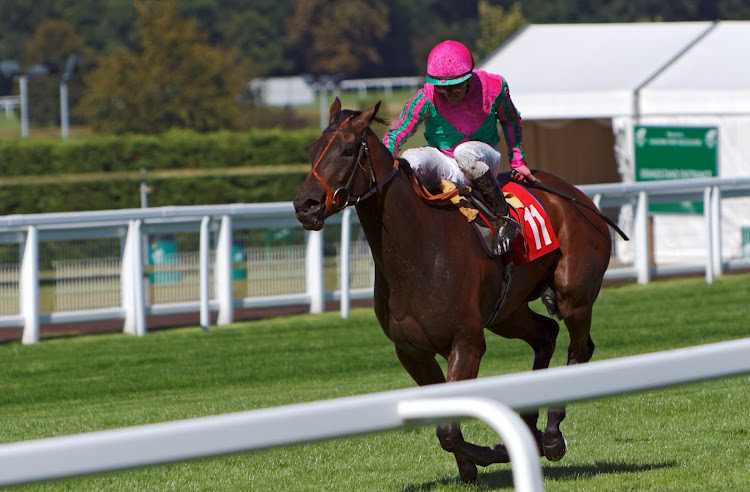 A jockey hits his horse with a crop during a race. Picture: 123RF/iknowme

It wasn’t the start to the new season that Richard Fourie had envisaged. The 36-year-old has been slapped with a 10-day ban and R35,000 fine for whip abuse on his mount, Jet Dark, in Saturday’s Champions Cup at HollywoodbetsGreyville.

After an inquiry, the stipendiary stewards stated that Fourie had “hit Jet Dark more than 12 times during the entire race”.

In considering the penalty, the stewards said they “considered that this was the jockey’s 13th transgression of the rule since August 1 2021 and his sixth offence inside the preceding 60 days period”.

It got even worse for Fourie when the stewards decided he had also transgressed the whip rule on Captain’s Ransom in the Mercury Sprint and imposed a R20,000 fine and seven-day suspension.

The Jet Dark suspension has caused plenty of comment on social media with a number of racing fans saying Fourie had to get vigorous with Justin Snaith’s star to hold off the challenge of Kommetdieding.

Gavin Lerena, the rider of Kommetdieding, was fined R10,000 for the same whip offence on the 2021 Durban July winner, but his fine was less than Fourie’s due to him having been found guilty of this transgression on fewer occasions.

The fine won’t worry Fourie — there may be a good chance of Jet Dark’s owners paying it as the colt earned them R625,000  for his win — but it means the Cape-based jockey starts on the back foot in his bid to win this season’s jockeys championship.

Surprisingly, no bookmaker has priced up on the title race which — without Warren Kennedy who is headed overseas — may chiefly concern Fourie, S’manga Khumalo, Muzi Yeni and Keagan De Melo.

No question that Fourie’s double on Jet Dark (Champions Cup) and Captain’s Ransom (Mercury Sprint) cost bookmakers dearly. They would probably have faced a bigger payout if his mount, Nebraas, had won the Marshalls World of Sport Gold Cup.

Fourie’s treble — he also won the final race on Saturday’s card on the Hollywood Syndicate-owned Isivunguvungu — means he finishes second in the 2021/2022 jockeys’ log but about 60 winners behind Warren Kennedy.

Isivunguvungu — which means “storm” in isiXhosa — provided the Hollywood Syndicate with their 100th winner of the 2021/2022 season.

Meanwhile, Goodwood officials have issued a press statement saying there was a “huge increase” in gross turnover for the World Pool on the three days it was in operation at the Sussex track last week.

More than £97m was bet into the pool over the three days, an increase of more than two-thirds on last year’s figure of £59m.

The World Pool, which was created by the Hong Kong Jockey Club in partnership with the UK Tote and Ascot, allows racegoers the chance to bet into a global pool covering more than 20 countries.

One of these countries is SA and one of last Saturday’s feature races at Greyville was the grade 1 Hong Kong Jockey Club World Pool Champions Cup. The take from the pool will provide a much-needed financial boost for the sport in KwaZulu-Natal.

Princess Charlene can gain reward for her generosity to racing

Princess Charlene can gain reward for her generosity to racing