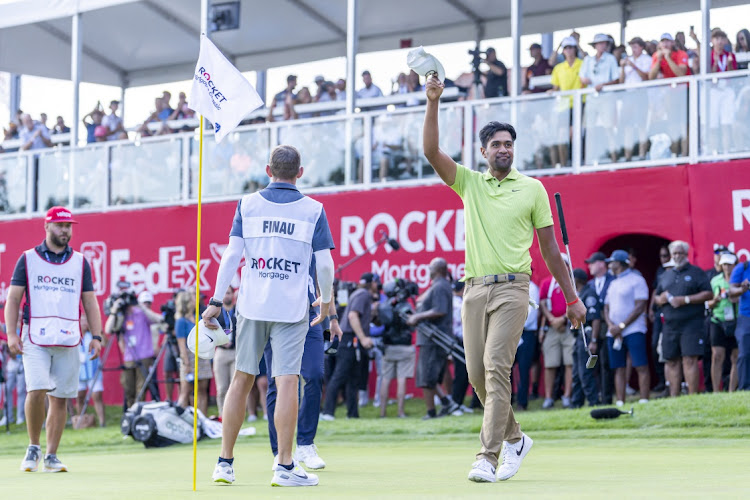 Tony Finau takes his hat off to the fans in celebration on the eighteenth green during the final round of the Rocket Mortgage Classic golf tournament in Detroit, Michigan, US, on July 31 2022. Picture: USA TODAY SPORTS/RAJ MEHTA

Tony Finau became the first player in three years to win back-to-back PGA Tour events on Sunday, as his final-round 67 gave him a comfortable five-shot victory at the Rocket Mortgage Classic in Detroit.

Finau carded a tournament record 26-under 262, one week after he surged ahead late on Sunday to win the 3M Open in Minnesota.

“Wins are so special out here because they’re so rare,” Finau said. “I think I’m gonna really be able to soak these up probably when I’m home. It probably hasn’t hit me yet, the magnitude of what I’ve accomplished these last couple weeks.”

Finau spent all week atop the leader board with Canadian Taylor Pendrith. They shared the lead after Thursday, Pendrith took a one-shot lead through 36 holes and Finau tied it back up during Saturday’s third round. But on Sunday, Pendrith struggled to an even-par 72 and settled for a tie for second with Patrick Cantlay (66) and Cameron Young (68) at 21 under.

“It was tough,” said Pendrith, who bogeyed the second hole on his way to three bogeys and three birdies. “Couldn’t really get anything going and didn’t get off to the best start like I did the last three days, but hung in there. You know, middle of the round I hit some really nice iron shots and just couldn’t get anything to fall.”

Finau had a quiet front nine, only birdieing the par-5 fourth and seventh holes. He went birdie-bogey-birdie after the turn, culminating in a 30-foot birdie putt at the par-4 12th. By that point, he was comfortably ahead of Pendrith and the pack.

Cantlay, the defending FedExCup champion, made a run by sinking five birdies on the front nine. After a bogey at No 12, he eagled the par-5 14th by sticking his second shot just 5 feet from the pin. But he couldn’t get closer, finishing birdie-bogey at the final two holes.

“I played well all week, really solid and that’s what I've got to keep doing, just keep knocking on the door,” Cantlay said. “And got three big tournaments to close the season out [in the FedExCup playoffs].”

Finau was projected to move up 10 spots to No 7 in the FedExCup points standings. Cantlay will move from sixth to fifth in the standings, and Young — a PGA Tour rookie who picked up his seventh top-three finish of the season — will move from 13th to ninth.

Germany’s Stephan Jaeger shot a final-round 68 to finish in fifth at 20 under, and Taylor Moore placed sixth at 19 under (including a 66 on Sunday).

Earlier in the day, Joohyung Kim carded an eagle and seven birdies to the course record of 9-under 63. The promising 20-year-old from South Korea received a special temporary membership for the remainder of the season that allows him to play on an unlimited number of sponsor exemptions as he aims to earn his PGA Tour card.

“It was a soft pitching wedge in the wind,” Kim said. “I saw it land, I didn’t know it went in and I kind of turned over to put my club in the bag and everyone just went kind of crazy. Yeah, it was just one of those shots where you don’t expect it, but it was a great shot.”