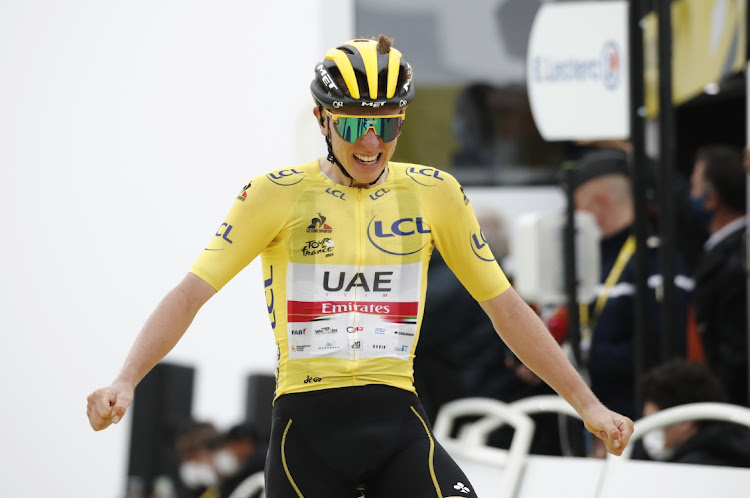 Tadej Pogacar of Slovenia celebrates as he crosses the finish line to win stage 17 at the Tour de France, July 14 2021 Picture: REUTERS/BENOIT TESSIER

Foix — Tadej Pogacar went on the offensive as promised but was never in a position to unsettle Tour de France overall leader Jonas Vingegaard in the first of three key mountain stages on Tuesday.

The defending champion attacked twice on the ascent to the Port de Lers (11.4km at 7%) and once in the descent, but yellow jersey holder Vingegaard shadowed him to retain his lead of 2min 22sec.

The stage was won by Hugo Houle, the first Canadian to win on the Tour since Steve Bauer in 1988, from the day’s breakaway after the Israel Premier Tech rider went solo in the last climb, the punishing Mur de Peguere (9.4km at 7.9%).

Houle did not look back in the long descent into Foix to beat France’s Valentin Madouas (Groupama-FDJ) and his compatriot and Israel Premier Tech teammate Michael Woods, who were second and third respectively, 1:10  behind, for his first professional victory.

“I never won a race! When I attacked it was basically to set the table for Michael Woods, and when I saw that they let me go I just went all, full gas, and at the end I was hanging on and hanging on,” said Houle.

“I won this stage for my brother who died when I turned professional. I won it for him, today I got the win for him. It’s incredible. I don’t know what to say. I’m so happy.”

In the group of favourites, Pogacar’s first brutal attack about  2.5km from the top of the Port de Lers caught Vingegaard off guard, but the Dane reined him in almost effortlessly.

He stayed on the Slovenian’s wheel when the 23-year-old went again as the yellow jersey group was dropped down to a dozen riders.

Far behind, one of Pogacar’s key teammates, Marc Soler, was dropped after he was sick by the roadside and the Spaniard finished outside the time limit.

Pogacar’s last attempt to attack came just after riders started their descent but once again Vingegaard easily covered the move.

In the ascent to the Mur de Peguere, Pogacar’s United Arab Emirates teammate Rafal Majka set a fast pace to further slim down the group, but the Pole’s chain snapped and he had to make way for Vingegaard’s Jumbo Visma teammate Sepp Kuss.

The US climber set a blinding pace that prevented Pogacar from attacking again while Geraint Thomas, the 2018 champion, was dropped, as well as Romain Bardet who had started the day in fourth place overall.

Thomas bridged the gap in the descent after holding on for dear life in the climb but Bardet had long disappeared from his rear-view mirror.

The Frenchman lost almost all hope of finishing on the podium in Paris on Sunday as he slipped down to ninth overall, after losing 3:36.