Runner lines up in the 400m semifinals, the stage of his elimination at the Tokyo Olympics 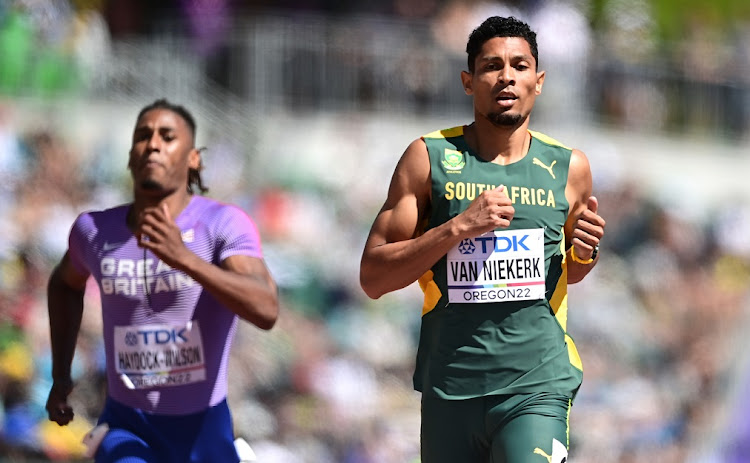 Wayde van Niekerk faces his moment of truth at the world championships in Eugene, Oregon, on Wednesday night (Thursday 4.31am SA time) as he bids to put his knee injury behind him and make his first final since 2017.

The owner of the 43.03sec world record from 2016 lines up in the 400m semifinals, the same stage where he was painfully eliminated at the Tokyo Olympics in 2021.

This time around 30-year-old Van Niekerk, who injured his knee in a game of touch rugby in 2017, seems better poised to advance to the last round of competition, but he will face his stiffest competition from US champion Allison and in-form Jonathan Jones of Barbados, both of whom have been faster this season.

Van Niekerk races in the final, third semifinal. The first two finishers from each of the three semifinals qualify automatically, with the next two fastest across the three races completing the eight-lane final.

In his semifinal Van Niekerk resumes his long-time rivalry with 35-year-old Isaac Makwala of Botswana. They have raced each other 13 times over the past nine years, with the South African winning nine times.

Their most recent duel was that semifinal in Tokyo, where Van Niekerk finished fifth, behind third-placed Makwala, who progressed to the final and later took bronze as part of Botswana’s 4x400m relay team.

Of the other six runners in Wednesday’s semifinal, Van Niekerk is facing two for the first time — Allison and Mikhail Litvin of Kazakhstan.

He has a 100% win record against the remaining four. Van Niekerk has beaten Belgian Kevin Borlée twice, both in 2016; he finished ahead of Jones in that Olympic semifinal and in the heat on Sunday; he downed Liemarvin Bonevacia of the Netherlands three out of three from 2013 to 2017; and he scored his first victory over Alex Haydock-Wilson of Britain in the heat in Eugene.

Countryman Zakhiti Nene will try to win a second lane for SA in the 400m final, going up against Michael Norman of the US and Briton Matthew Hudson-Smith in the first semifinal (4.15am Thursday SA time).

Nene set his 44.92 personal best this year, but both Norman and Hudson-Smith as well as Lidio Andres Feliz of the Dominican Republic, a gold medallist from the mixed 4x400m relay on Friday, have been faster.

Former world champion Kirani James of Grenada competes in the second semifinal, which also features Michael Cherry, the third American in the 400m field. The last American to win the 400m world title was LaShawn Merritt at the Moscow showpiece in 2013. He was succeeded by Van Niekerk in 2015 and 2017.

Steve Gardiner of the Bahamas won it in 2019, but neither he nor silver medallist Anthony Zambrano of Colombia are in the line-up in Eugene. Gardiner and Zambrano also took the Olympic gold and silver medals in Tokyo last year.

‘Anybody who breaks a record will be rewarded double double,’  but no details given
Sport
2 months ago
Next Article