The AG2R-Citroën rider tested positive on the eve of the start last Thursday, but his viral load was low enough for him to ride 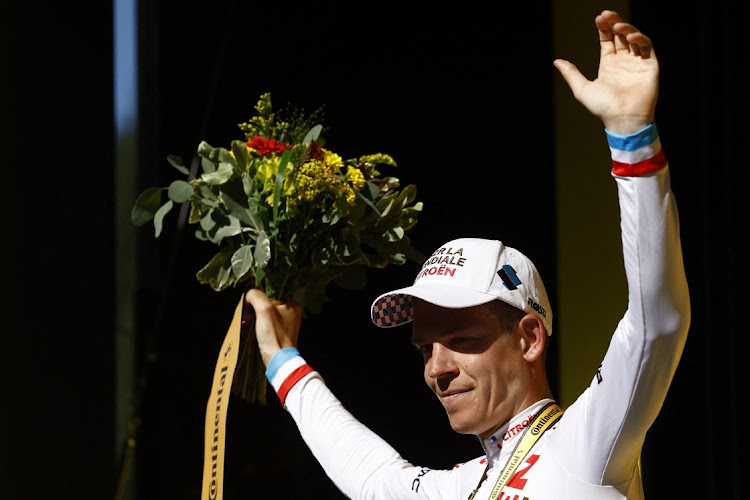 Bob Jungels celebrates on the podium after winning stage 9 of the Tour de France, in France, July 10 2022. Picture: CHRISTIAN HARTMANN/REUTERS

Chatel — Bob Jungels won the ninth stage of the Tour de France at the end of a long solo mountain raid on Sunday after Covid-19 almost prevented the Luxembourg rider from starting the race last week.

The AG2R-Citroën rider tested positive on the eve of the start in Copenhagen last Thursday but was cleared to take part after a panel of doctors ruled that his viral load was low enough for him to ride.

Jungels prevailed from the day’s breakaway in searing heat in the Alps after resisting a fierce chase by France’s Thibaut Pinot, who surrendered in the final kilometres and finished fourth.

Slovenian Tadej Pogacar retained the overall leader’s yellow jersey after spending a quiet day in the bunch, crossing the line just ahead of last year’s runner-up, Jonas Vingegaard, after a short sprint to the line.

The breakaway took shape after a super fast start near the headquarters of the International Cycling Union with Lake Geneva in the background.

They were being kept in check by a peloton led by Pogacar’s UAE Emirates team.

Pierre Latour jumped away from the breakaway group 3.5km from the top of the Col de la Croix, an 8.1km effort at 7.6%, but he was countered by Jungels, who went solo 62km from the line.

There were 13 chasing, lagging 1min behind at the bottom of the descent, and they were 1:50 off the pace at the foot of the last main climb.

Jungels’ lead was up to 2:10 when Pinot produced a brutal acceleration to go after the Luxembourg rider 9km from the top of the Pas de Morgins, a 15.4km ascent at an average gradient of 6.1%.

Pinot, who came agonisingly close to winning the Tour in 2019 but abandoned injured two days before the last stage, narrowed the gap to 19sec but when the road became flatter, the Groupama-FDJ rider started to lose time on Jungels again.