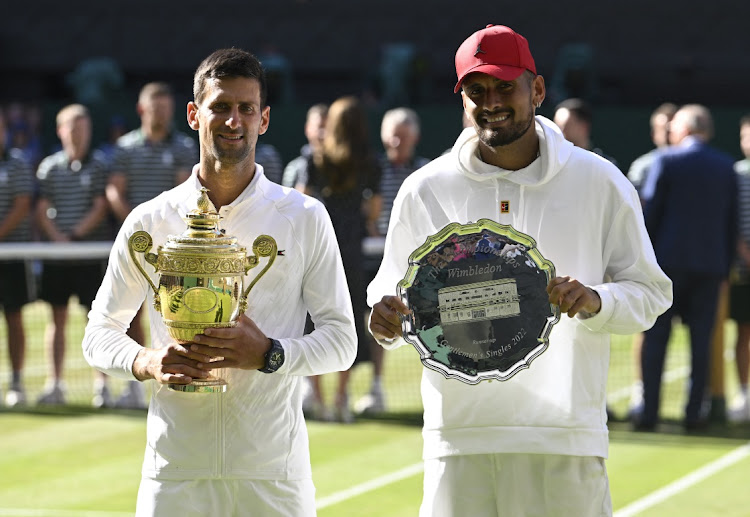 Rallying from a set down, Djokovic exhibited ice-cool nerves in sweltering conditions to win 4-6 6-3 6-4 7-6(3) for his fourth consecutive trophy at the grass court Major to close in on Rafa Nadal’s record 22 Major crowns.

Competing in a men’s record 32nd Major final on a sunbathed Centre Court, the 35-year-old was facing an unseeded opponent who had never been beyond the quarterfinals at a Grand Slam before this fortnight.

In their only two previous meetings, both in 2017, Djokovic did not win a set, did not once break the Kyrgios serve and had only a single break point opportunity.

Five years later, it was another sublime serving performance from the Australian in the early stages and he did not allow Djokovic any look at his delivery in the opening set, getting 77% of his first serves in and firing down seven aces. 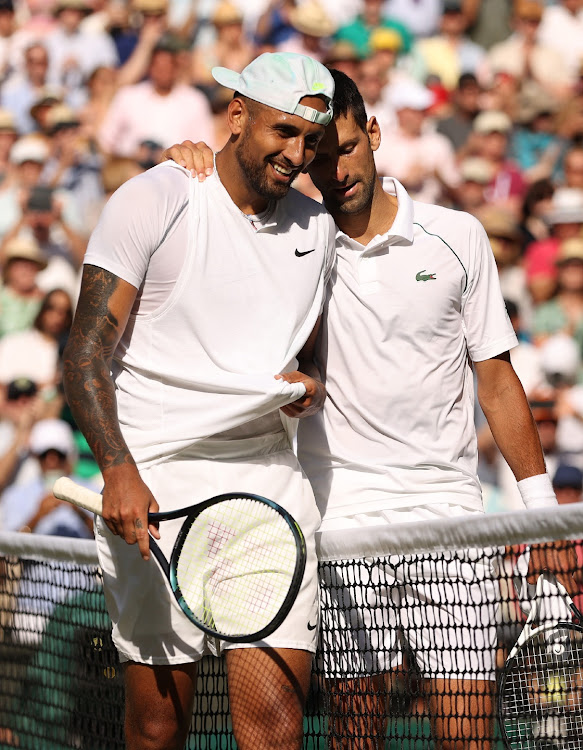 A few well-disguised drop shots from Kyrgios helped him set up two breakpoints in the fifth game and a double fault from Djokovic brought up the first break of serve, which was enough for Kyrgios to take the lead.

Focused from the start, Kyrgios, however, did not forget to entertain the crowd when he could. There was an underarm serve and he hit a return on the half volley between his legs to delight the Centre Court crowd.

No-one, however, expected it to be an easy straight-sets match with Djokovic having not lost a match on the manicured lawns at the All England Club since he retired injured during his 2017 quarterfinal against Czech Tomas Berdych.

Djokovic’s delivery went up a gear and the Serb slowly but surely started demonstrating why he is considered the best returner in the sport.

He would have been hoping to read the Kyrgios serve better and for his opponent’s level to drop and once it did in the fourth game of the second set, Djokovic was ready to pounce.

With Djokovic serving to level the match at one set apiece, however, Kyrgios raised his game to set up four break points, only for the top seed to save all of them and convert his first set point to leave the Australian fuming.

Kyrgios was furious with himself and poured out his frustrations in a lengthy rant aimed at his box.

During the first week of the grass court Grand Slam, Kyrgios played his usual role of pantomime villain but as his run got deeper, the 27-year-old presented a much calmer demeanour to reach the biggest match of his career.

The Australian maverick was back to his usual hot-headed self during the third set as Djokovic started playing pristine tennis. Kyrgios was broken from 40-love up in the ninth game and continued swearing and shouting at his box.

Djokovic ignored the drama across the net and after holding serve to bag the third set he calmly collected his bag and left the court, leaving his opponent sitting on his chair and shaking his head in frustration.

After both players failed to create a breakpoint in the fourth set, Djokovic dominated the tiebreaker and sealed the Championship on his third match point after three hours when Kyrgios found the net on a return.

Djokovic raised his arms to the sky and after a shake of hands with his opponent, he bent down to pluck some grass from the famous old court and taste it before running up to his player’s box to kick-start the celebrations.