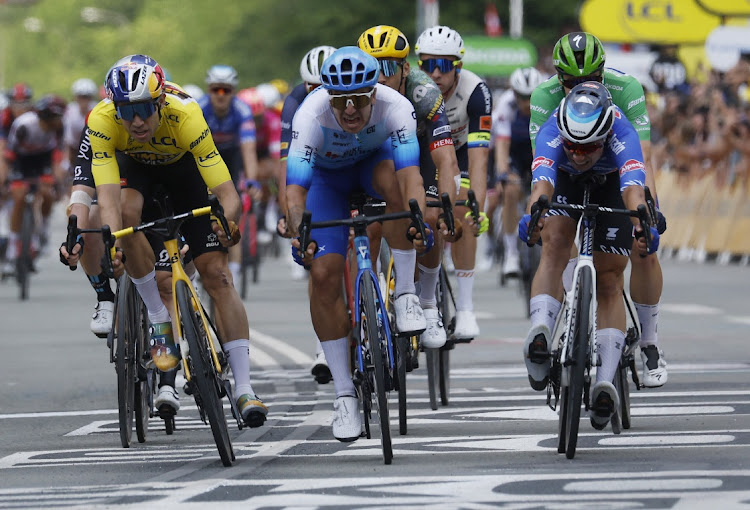 It was a sweet victory for Groenewegen who was suspended for nine months by the International Cycling Union in 2020 for causing the crash that severely injured Fabio Jakobsen at the Tour of Poland. Jakobsen won Saturday’s stage two.

“It was a long way [back]. I want to say thanks to my team, family and friends to bring me back to the Tour in a good shape. It’s beautiful,” said Groenewegen.

“Not physically but mentally it was a hard time, of course. This is for my wife and my son. It means a lot for me.”

Belgian Jasper Philipsen crossed the line in third and Peter Sagan of Slovakia finished the 182km flat ride from Vejle to Sonderborg in fourth spot.

It was a third consecutive runners-up finish for Belgian Van Aert, who made little attempt to hide his frustration.

“This must be a record ... three days straight in the Tour de France,” said the Team Jumbo-Visma rider. “Definitely today it was my own fault ... [but] it’s been a really special three days and happy to take it to France now.”

Magnus Cort of EF Education-EasyPost led the stage’s early breakaway and rode solo for 130km, cheered on by droves of home fans as the Dane cemented his place at the top of the King of the Mountains classification.

The big drama of the day arrived with 10km to go after several riders hit the deck after a huge crash, but most of the top contenders escaped unhurt and did not lose any time.

Monday is a rest day before the riders head to France and tackle the mountains for the first time on Tuesday in a 171.5km journey from Dunkirk to Calais.