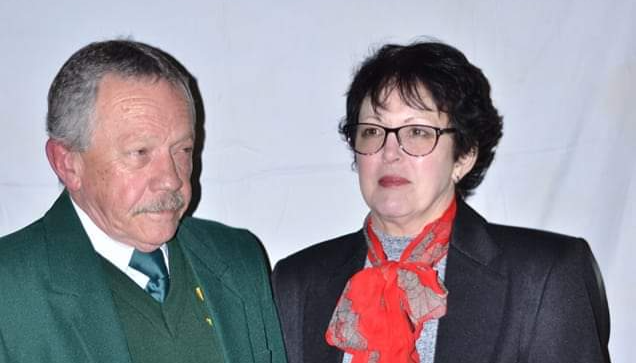 Moonyean and Hans Britz are often in opposite corners in the boxing ring. Picture: SUPPLIED

Moonyean Britz first started taking an interest in boxing in order to spend more time with her husband Hans, the current national high performance coach with the national team.

But she has learnt the ropes so quickly that she will be part of Team SA at the forthcoming Commonwealth Games in Birmingham, England and for a change it will be Hans who stays home.

All are gold medallists from last year’s SANABO Youth and Elite Championships.

And Britz, who will celebrate her 60th birthday while in Birmingham, has absolutely earned her right to be in the South African corner. She’s literally had to fight her way through the ranks before enjoying her place in the spotlight and her and Hans are the only married couple with Protea colours in coaching and management at the highest Open (formerly known as Amateur) level.

“It’s my first trip to a multi-code sports event,” she says. “Hans has been several times and come back to tell me all the magical stories about Team SA and I’m so excited to be part of the team. We may be one of the smaller codes but I really hope to be part of helping give them their best chance at winning medals.

“I don’t know our three boxers personally [they come from KwaZulu-Natal and Eastern Cape, [while her and Hans hail from Tshwane] but I’ve kept a close eye on them at our national training camps and they’re already like my children.”

She will be accompanied in the corner by seasoned campaigner Nkosinathi Hhlatshwayo. “We’ll both be in the ring and sharing the coaching/management duties, although we each have our own strengths.”

When it comes to strength and female boxing Britz is unflinching when it comes her views.

“It may sound strange but my experience is that women actually hit harder than their male counterparts… and I think many of the male coaches have found that out too, on the hand-pads.

“A women’s survival instinct kicks in when they’re in the ring… once they know how to hit the correct blows they put their absolute all into it.

“We just have to teach our female boxers to hit the target better and not be so wild but still, Open female boxing has improved 200% in the past few years.”

But she admits the standard of women’s Open boxing is a long, long way off their international counterparts. “They simply don’t get enough international exposure – but we’re getting there, one blow at a time.”

Fighting talk comes naturally to Britz [her first name is of Celtic origin although she says it’s often mistaken for Chinese] in more ways than one as she’s come through the ranks. One particular tale resounds with grit and guts.

“In 2017 I attended an IBA [International Boxing Association] 1-star coaching course in Mdantsane, Eastern Cape where I was the only female and only person not of colour, neither of which bother me because I don’t work with colour or race or gender … I work with boxers.”

But the resistance she encountered from her fellow coaches was palpable. “None of the group discussions were in English. Even the international facilitator from Sri Lanka was non-plussed.”

Over time, one of the Limpopo coaches took her aside and started translating for her and saying the group were testing her as a woman and wanting to see how long she lasted.

“As coaches we had to work out training/fighting programmes and then spar amongst ourselves to demonstrate physically. I tell you, those coaches hit me as hard as they could, saying in a man’s world you have to fight like a man.

“That night I phoned Hans to tell him that I just had no choice but to hang in and if I quit and went home I wouldn’t be able to live with myself as a failure.”

The next day she decided to take matters into her own hands (or fists) and started hitting back and by doing so started to earn respect.

“Later in the course they saw that I knew my rules backwards, was well-prepared in terms of programmes and nutrition etc and the whole attitude changed. These days at tournaments those same coaches come and share their experiences with me.

“It was really difficult to begin with but the fact that I stood up and faced them, changed their attitudes to female coaches and that’s what I’m trying to do every day with all the female coaches that I’m working with.”

And she also has a day job to contend with, a high-pressure role as an ICT (Information & Communications Technology) at Transnet Freight Rail in Johannesburg.

“The funny thing is that I started taking an interest in boxing to spend more time with Hans … these days we’re hardly together in a boxing sense. For example: next week’s national champs are in Gqeberha so we’ll travel down together, then spend most of the time on opposite sides of the ring and then drive back home after the champs,” she laughs.

Come July 28 when boxing gets underway in Birmingham, the Britz family focus will be firmly on one corner, and that’s Team SA… mark your calendar.

Tyson Fury vows to throw in the towel after TKO win