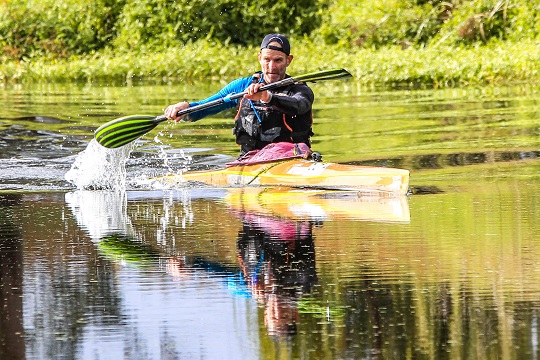 While he may not have won as many titles as Hank McGregor, Graeme Solomon will return to race the 2022 Berg River Canoe Marathon from  July 6-9 with the race’s most distinguished track record behind his name.

Now 49, Solomon will be a factor in the fascinating tactical tussle at the front of the race, particularly with the introduction of the time incentives at the bridge hotspots on every stage of the race.

“I am not so sure I can outsprint Hank [McGregor] or Hamish [Lovemore], but with the race set up like it is now I reckon they will want me on the front bunch,” said the 2018 and 2001 champion.

Solomon showed he has lost none of his racing form by winning the Western Cape K1 river champs title on the Berg River last weekend, and has a record as an elite racer that few have come close to rivalling.

He has raced onto the podium 13 times in his 22 Bergs, with two wins, eight second places and three third-place finishes to his credit.

“This year’s race is going to be so interesting,” he mused, hinting that he is expecting it to be contested on a medium to low Berg River.

“The river has changed a lot in recent years. It has channelled and you can race it a lot easier on low river levels than was the case in the past.

“In the last few years we have paddled over a lot of the tree blocks, but this year it will be different, and that is where I can be an asset to the front bunch,” said Team Bamboo Warehouse paddler Solomon.

“A lower river makes it harder, and the Berg is 250km now so pacing yourself is everything.

“The list of top paddlers who have popped on day three is long, very long,” the experienced Solomon reflected, rattling off a long list of elite paddlers who had been sidelined after the second stage.

“And it has nothing to do with the hamburgers at Bridgetown.”

Solomon was pleased with his fourth place in the ferocious 2021 race that was won by Andy Birkett.

“I had a dreadful day one and I kind of consolidated on day two, so to finish fourth ahead of Wayne Jacobs, who I really rate, was great,” said Solomon.

As he nears 50, Solomon relishes every race that he is able to remain competitive.

“It’s all about gratitude,” he said. “I am grateful for the fact that I can do what I do, and because I can, I must.

“I am blessed to be able to still compete. I know lots of people who would give anything to be able to do what we do, and I don’t take that for granted.

“I hope this is a lesson for our kids,” he said.