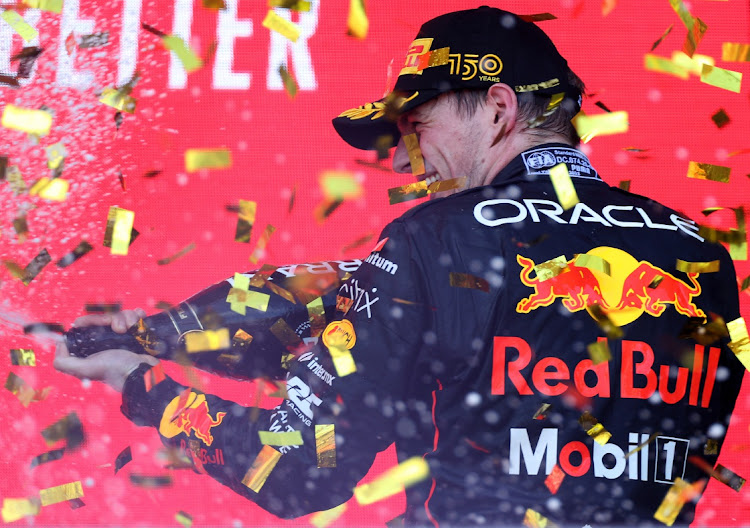 Max Verstappen of the Netherlands and Oracle Red Bull Racing celebrates on the podium after winning the F1 Grand Prix of Azerbaijan at the Baku City Circuit, June 12 2022. Picture: PETER FOX/GETTY IMAGES

Baku — Max Verstappen took full advantage of an engine failure for Ferrari’s Charles Leclerc to win the Azerbaijan Formula One Grand Prix on Sunday and open up a commanding lead in the world championship.

The Dutchman crossed the line 20.8sec clear of Sergio Perez who, ordered not to battle Verstappen, completed a one-two for Red Bull after race leader Leclerc pulled into the pits with a smoking engine on the 20th lap.

“From the beginning, we just had really good speed already,” Verstappen said. “First of all, the start was very good, but I couldn’t really go anywhere. Then I tried to overtake Charles, but we lacked top speed to really attack. After that, I was able to watch my tyres very well.

“We could have pitted during the first virtual safety car, because in the end that did look good for Charles. But with the speed we had, I would have closed the gap. Of course, the question is whether you can overtake. The speed was really good today in the race though.”

George Russell took third for Mercedes and his teammate Lewis Hamilton, voted “driver of the day”, fought through back pain to finish fourth.

Pole-sitter Leclerc’s retirement was his second in three races and was part of a double-DNF (did not finish) for Ferrari, with teammate Carlos Sainz having already stopped with a hydraulic failure.

“It hurts. We really need to look into that for it to not happen again.  I don’t really find the right words to describe this,” Leclerc told Sky Sports television. “It’s very, very disappointing. We’ve been fast and we didn’t have particularly big problems in the first part of the season.

“Now it seems that we have a bit more compared to the beginning but we didn’t change massive things. It’s difficult to understand for now, but we will have to analyse.”

Leclerc could not say how the failure might affect his engine allocation for the rest of the season, with grid penalties for exceeding the number permitted. It dropped Leclerc to third in the overall standings, 34 points behind Verstappen. Perez, winner in Baku last year after Verstappen crashed out of the lead, is second, 21 points behind his teammate after also scoring the point for fastest lap.