He has a very good understanding of how to win golf tournaments, says winner 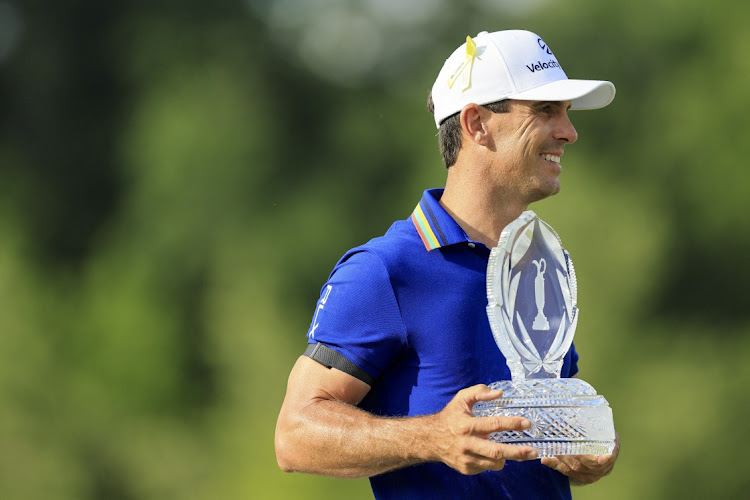 Billy Horschel poses for a photo with the trophy after winning the Memorial Tournament. Dublin, Ohio, US on June 5 2022. Picture: USA TODAY SPORTS/AARON DOSTER

Billy Horschel made an eagle putt from nearly 53 feet away en route to a four-shot victory at the Memorial Tournament on Sunday in Dublin, Ohio.

After sleeping on a five-stroke lead through three rounds, Horschel stayed ahead of the pack with relative ease at Muirfield Village Golf Club to win the tournament founded by Jack Nicklaus.

“I’ve watched Tiger and how he closes out events. And I wasn’t born yet in Jack’s heyday when he was winning, but I watched old footage,” Horschel said, seated next to the 82-year-old golfing legend. “You watched how he plotted his way around the golf course. You took a lead and you made sure he was never giving up shots back to the guys.”

Horschel shot an even-par 72 on a day when only four players broke 70 and nobody shot lower than a 69. At 13-under 275 for the week, he beat out Aaron Wise (9 under), while Patrick Cantlay and Chile’s Joaquin Niemann tied for third at 7 under.

Horschel came to the par-5 15th hole one over for his round and reached the green in two shots. His eagle putt from 52 feet, 10 inches travelled down a ridge in the green and slowly broke from right to left before dropping into the right side of the cup.

It was Horschel’s seventh win on the PGA Tour, his first since the 2021 WGC-Match Play 15 months ago. He also won the BMW PGA Championship in Europe in the last northern autumn.

“I have a very good understanding of how to win golf tournaments,” the 35-year-old said. “Have I put myself there a lot? No, but I think my record’s pretty good when I do have a chance to win and closing out events.”

Horschel went bogey-free in his second and third rounds before committing three bogeys on Sunday, along with one birdie and the triumphant eagle.

Wise shot a 1-under 71. It appeared he was gaining steam when he made consecutive birdies at Nos 10-11, but two bogeys in his last six holes kept him from truly threatening Horschel.

“Today there was some wind we had to deal with. It was swirly,” Wise said. “You get in the channels and in the trees there, and it’s not where it should be. It plays tricky. But I did a good job managing it. I thought I put a really good round together. It just wasn’t quite enough today.”

Cantlay and Niemann also shot rounds of 71 on Sunday. Cantlay had won the Memorial in 2019 and 2021 and was trying to add a third title in four years.