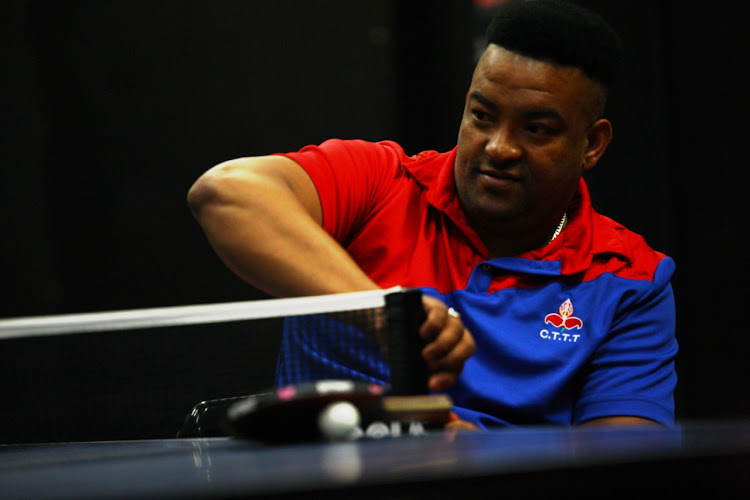 Shaun Jones is gearing up for the Commonwealth Games in July. Picture :SUPPLIED

When it comes to SA table tennis it really is difficult trying to keep up with the Joneses. This Manenberg family eats, sleeps and breathes table tennis, with the head of the table father Shaun Jones an eight-time national champion.

Two of those titles were at senior level — in 2003 and again, 18 years later, in 2021. Turning 40 and reaching veteran status later this month, Jones has found new inspiration from his inclusion in the SA team to travel to Birmingham, England, for the Commonwealth Games in July.

“I’ve taken part in numerous table tennis Commonwealth Games over the years,” says Jones. “But this will be my first multicode Games.

“I’m over the moon to go to the Games, especially after hanging up my bat for two years [2016-2017] and then after the long sporting break during the first years of Covid-19.”

One of his best results in elite competition (seventh/eighth spot playoff) came at the Commonwealth table tennis championships in Glasgow, Scotland, in 2009, the same city that went on to host the multicoded Games five years later. He has also represented SA at many All African Games around the continent.

“In Birmingham I’ll be playing both singles and doubles events,” he says. “In the team event I think a top-eight result is realistic and if we make the top five that would be a bonus.

“Individually the competition will be even stiffer as I haven’t played at the very highest level for a while now and have been busy retraining myself for that opportunity.”

Involved in the motor-trimming and upholstery trade, Jones juggles two jobs as he is also helps to drop local children off at their various schools in the early morning.

Plying his table tennis trade has taken Jones to more than 20 countries, but China holds the fondest memories for him.

“Obviously that’s because of the high level of table tennis and what you can learn playing there but there were also many off-table experiences. One that sticks out was when we went out for dinner.

“There was a big pot of simmering liquid in the middle of the table where one was supposed to dip raw seafood in to be cooked, but to my amazement, among the items waiting to be cooked was an entire snakeskin!”

Back home and it’s all about table tennis, though, as all five of his children have followed in the footsteps of their father, who won his first national junior title (Under-17) 24 years ago while playing for Stephanians Club in Lansdowne.

“Even my wife Anthea picks up a bat quite often. We certainly don’t want to force the children, though, it must come from them. Michan played the Cape Town Table Tennis trials recently while at the same trials, Shonah qualified for the Uinder-13 division of the SA Open in Durban later this year.”

And it’s the left-handed Shonah that one really sees lighting up her father’s eyes. “I know I’m her dad but as a table tennis player myself I can see how much talent she’s got. I was talented, but have to admit that I didn’t always want to work hard.

“So I’d really like her to see where hard work gets her.

“I honestly think the sky’s the limit for her. I want her to reach a limit where she attracts sponsors etcetera and sports bursaries to improve herself even more, not only in sport but academically.

“My great dream is for her to play overseas, even professionally. I truly think she could become SA’s first African table tennis champion.”

“The situation is not often easy but I’ve lived here for close to 40 years, and one just has to be sensible. One often hears someone being shot at, or stabbed or robbed. It’s scary but you can’t run away from it — that’s where responsible parenting comes in.

“On my early morning school-runs it’s often the parents of the children who warn me which areas are hotspots and where to be careful.

Little Shonah is all too aware of what that entails. “Playing table tennis keeps me fit and also helps my brain keep busy but I still get scared when I hear the shooting,” she says.

So as Jones senior hones his preparations for Birmingham and Jones junior sets her sights on Durban later this year the only shots the duo want to focus on are those on the table.