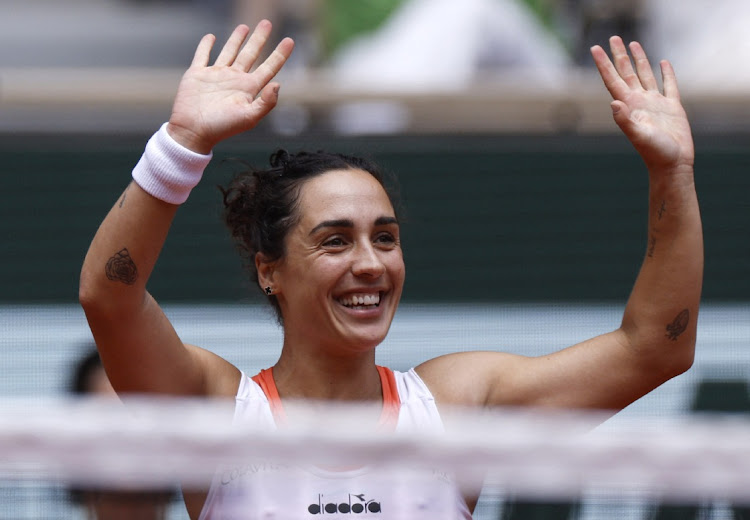 Paris - Unseeded Italian Martina Trevisan maintained her impressive form as she surged into the French Open semifinals with a 6-2 6-7(3) 6-3 defeat of Canadian teenager Leylah Fernandez on Tuesday.

Trevisan, who will face American Coco Gauff in the last four, had all the answers as she dominated most of the match against a below-par Fernandez who struggled to repeat the form that took her to last year's US Open final.

The world No 59 could have won in straight sets, but wavered when serving for the match at 5-4 in the second as fellow left-hander Fernandez dug deep to stay in the contest.

Fernandez claimed the tiebreak comfortably to become the first player to take a set off Trevisan at Roland Garros this year, but it was to prove only a brief respite.

Trevisan raced into a 3-0 lead in the deciding set and won a fiercely contested fourth game to earn a double break.

Seventeenth seed Fernandez, who was treated for a foot injury in the first set, was never going to go away quietly though and broke serve twice herself to claw back to 3-5.

The nerves were obvious as Trevisan again served for the match, but this time she would not be denied as she secured the win with an angled crosscourt forehand.

“I felt a bit nervous on the match point [in the second set] but it was normal to feel that emotion because this was only my second Grand Slam quarterfinal,” said the 28-year-old Italian, who won her first WTA title in Rabat this month.

“I came here with a lot of energy and to put all my emotion on the court.”

Trevisan displayed her clay court expertise two years ago in Paris when she lost to eventual champion Iga Swiatek in the quarterfinals. Now she has gone further and will be confident against another teenager, 18th seed Gauff, in the semis.

She beat Gauff during her 2020 run to the quarters.

She is bidding to emulate compatriot Francesca Schiavone, who won the title in 2010, and the way she is playing suggests she will take some stopping in that quest.

Fernandez winced in the fifth game and needed treatment on her left foot but after resuming, slipped 5-2 down as Trevisan fired a forehand winner down the line.

The 19-year-old Canadian earned a break at the start of the second set, but Trevisan re-established control and broke twice to hold a 5-4 lead with her serve to come.

Fernandez showed great calmness, however, to take the match into a tiebreak which she claimed with ease.

She could have no complaints, however, as Trevisan seized her opportunity in the decider and held her nerve for her 10th successive victory. Reuters