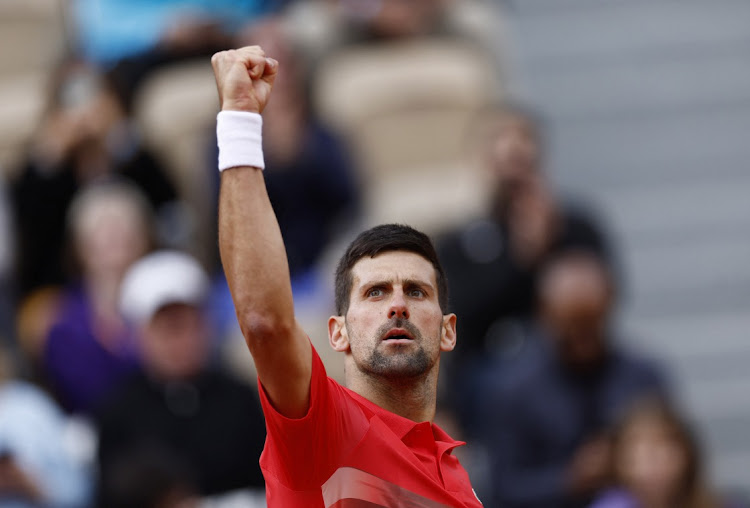 Serbia's Novak Djokovic reacts during his fourth round match against Argentina's Diego Schwartzman at Roland Garros in Paris, France, May 29 2022. Picture: YVES HERMAN/REUTERS

Paris — Novak Djokovic showed glimpses of his brilliant best to demolish Diego Schwartzman 6-1 6-3 6-3 on Sunday and book his place in the French Open quarterfinals where he is likely to face 13-times champion Rafael Nadal.

The world No 1’s pace was too much for Argentine Schwartzman, who barely threatened despite enjoying a 3-0 lead in the second set. From then on it was a one-way street for Serbian Djokovic, who won 12 of the remaining 15 games on a chilly Court Suzanne Lenglen.

“I have a lot of respect for him. He’s good guy on and off the court and he’s a clay court specialist so it’s not easy especially in slow conditions with a ball that was not bouncing high,” said Djokovic of Schwartzman, a semifinalist at Roland Garros in 2020. “I found the good serves at the right moments.”

The match looked nothing like the 2017 Roland Garros thriller between the pair, when Djokovic had to fight from two sets down to advance to the fourth round.

Djokovic, who reached the last eight in Paris for the 13th year in a row, saved two break points at 1-1 before Schwartzman dropped serve to give his opponent the early lead in the opening set. He raced through it, barely troubled by his opponent’s drop shots and almost managing to get the extra shot.

But the Argentine was not ready to give up and broke for 2-0 in the second set and held for 3-0 only for Djokovic to raise his level again to break back with a cross-court forehand winner.

Always ready with a good serve when needed, the Serbian staved off break points in the next game to level for 3-3, took the 15th seed's serve again and wrapped up set two after another break. Schwartzman showed signs of frustration when Djokovic left him red-faced with a delightful drop shot to go 3-2 up in the third.

Djokovic, back on the Grand Slam scene after being barred by local authorities from playing at the Australian Open over his refusal to get vaccinated against Covid-19, ended the Argentine’s ordeal by winning his final service game to love.

US Open finalist Leylah Fernandez won a baseline battle against American 27th seed Amanda Anisimova 6-3 4-6 6-3 to book her spot in the quarterfinals of the French Open for the first time.

The only other time the Canadian left-hander made the second week of a Grand Slam was during her run to the final at Flushing Meadows in 2021 when she lost to fellow teenager Emma Raducanu.

“It was a very complicated game and I’m happy I managed to get through,” she said in an on-court interview, speaking in French.

American 18-year-old Coco Gauff advanced to the quarterfinals for the second straight year with a 6-4 6-0 win over Belgian 31st seed Elise Mertens.