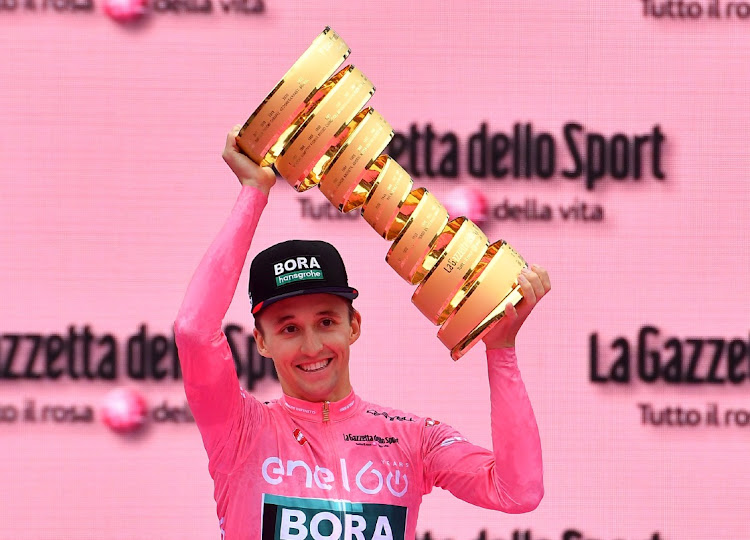 Jai Hindley celebrates with the trophy after winning stage 21 of the Giro d'Italia, in Verona, Italy, May 29 2022. Picture: JENNIFER LORENZINI/REUTERS

Bora–Hansgrohe rider Jai Hindley became the first Australian winner of the Giro d’Italia on Sunday after safely coming through the final stage, a 17.1km time trial around Verona, to stay ahead of Ecuadorian challenger Richard Carapaz.

A powerful finish to Saturday’s final mountainous Giro stage gave Hindley a commanding lead over Carapaz in the general classification, meaning he just had to avoid disaster in Verona to claim his first Grand Tour title, which he did with ease.

Hindley had reason to be cautious going into Sunday’s finale. In 2020, the Australian lost a Giro title that was in his hands to Tao Geoghegan Hart in the Milan time trial — the Briton pulling back 39sec in the final 15.7km stage.

However, this time Hindley’s efforts in the final kilometres on Saturday left Carapaz for dead, after he had gone into the 20th stage behind the Ecuadorian in the general classification, and he held a significant 1min 25sec overall advantage ahead of the time trial.

Carapaz, who had looked primed to add to his 2019 title with another Giro crown before Hindley’s Saturday turnaround, went all out to spring a surprise, and went faster in Verona, coming 10th on the day, but it was not enough, as Hindley cruised to the finish line, taking the acclaim from the crowd.

Spaniard Mikel Landa took the final spot on the overall podium behind Hindley and Carapaz, ahead of 37-year-old two-time Giro champion Vincenzo Nibali in fourth, riding his final Giro.

Italian rider Matteo Sobrero of BikeExchange–Jayco earned a first Giro stage win of his career after posting an impressive early time of 22:24.54, which could not be bettered.