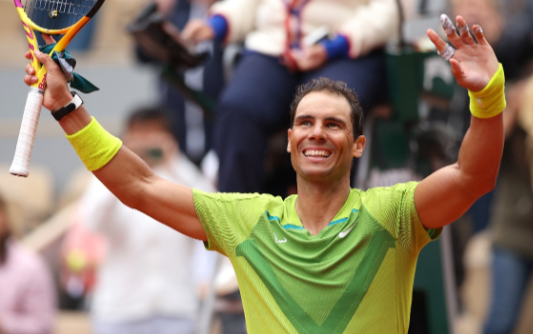 Rafael Nadal of Spain celebrates winning match point against Jordan Thompson of Australia during their match at the 2022 French Open at Roland Garros in Paris, France, on May 23 2022. Picture: GETTY IMAGES/ADAM PRETTY

Paris — Rafael Nadal showed no signs of pain as the 13-time French Open champion marched into the second round at Roland Garros with a clinical 6-2 6-2 6-2 demolition of Australian Jordan Thompson on Monday.

The Spaniard, who had never arrived in Paris as unprepared as this year after a rib injury and a chronic foot problem hampered the build-up to his beloved Grand Slam tournament, was never bothered on a chilly Court Philippe Chatrier.

“It’s incredible for me to play here again on Chatrier. I’m happy with this win. First round is always special,” said Nadal.

The 35-year-old, who has a record 21 men’s Grand Slam titles to his name, played down the chances of adding to his tally but his display was reminiscent of those of previous years.

Nadal broke for 2-1 with a backhand volley winner and his massive forehand helped him quickly move 4-1 up against an overwhelmed opponent.

The fifth seed looked to finish off some points quickly and made several unusual unforced errors, but they were of little consequence as he breezed through the opening set.

Nadal broke serve in the first game of the second set and again in the fifth and seventh as he started to play more neatly, bagging it with a service winner.

Thompson, who pulled a break back, looked completely worn out by then but managed to hold it together until 2-2, when Nadal broke with a forehand volley and won all the rest of the games.

Meanwhile, a tearful Barbora Krejcikova said she hit a wall physically midway through her match against Diane Parry, with the defeat ending the Czech second seed’s French Open title defence in the opening round.

Krejcikova’s last competitive match was in February in Doha before she took a lengthy break to deal with an elbow injury, but she still managed to win the first set in brisk fashion and opened up a 2-0 lead in the second against the local hope.

But her problems started soon after as errors and double faults began to creep into her game as the match progressed against her 19-year-old opponent, who had never faced a top-10 opponent in her career.

“I think set and 2-0, that was where I hit the wall,” an emotional Krejcikova told reporters, with tears trickling down her cheeks.

“I just collapsed physically, and, I mean, it was tough because I didn’t play the matches. Usually the matches are different from the practices, and I tried to prepare the best way I could. But, yeah, I collapsed.”

Krejcikova, who left the news conference for a few minutes to compose herself, said she was pain-free but she struggled to keep up with the pace during the rallies against the 97th-ranked Parry under the closed roof of Court Philippe Chatrier.

“There was option of a surgery, as well, which I denied,” she said, adding that she was unsure of how to deal with her elbow problem for a long time.

“I didn’t want to do that one. I was just looking for a different option. I was actually lucky that I found a different option, and with the doctors, they were very nice and they tried to help me the best way they could.

“Then we finally found out how to treat it, I said maybe I will not make it to Roland Garros. So I’m still very happy to be here.”