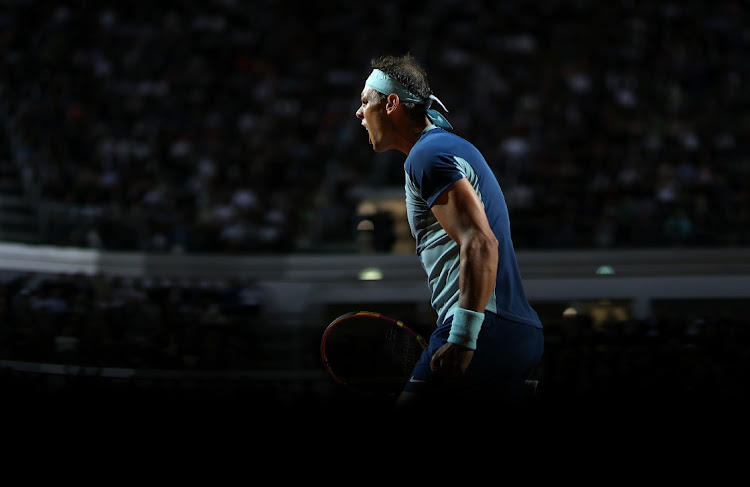 Rafael Nadal of Spain reacts in his 3rd round match against Denis Shapovalov of Canada on day five of Internazionali BNL D'Italia at Foro Italico on May 12 2022 in Rome, Italy. Picture: GETTY IMAGES/JULIAN FINNEY

Rafa Nadal has moved to ease concerns about his injury problems ahead of the French Open, posting a picture of himself training in full flow at his academy in Mallorca with the caption: “See you on Wednesday, Paris.”

The 13-time Roland Garros champion said last week that daily training was a challenge and he would take a doctor with him to Paris after a chronic foot injury flared up during his defeat by Denis Shapovalov at the Italian Open.

Nadal, who only recently returned from a stress fracture in the ribs, struggled towards the end of his match against the Canadian as he went down 1-6 7-5 6-2 in the last-16.

But the world No 5 looks poised to launch another bid for a Grand Slam title at his favourite hunting ground, having won his 21st Major at the Australian Open earlier in 2022. That victory followed a difficult 2021 during which he missed Wimbledon, the Tokyo Olympics and the US Open.

Nadal will be trying to reclaim the title in Paris after he suffered a semifinal defeat last year against Novak Djokovic, only his third career loss at Roland Garros.

His crowning achievement was not quantified in cups, titles or dollars; it was the longevity of his competitive spirit when his body was refusing to ...
Life
1 month ago

Spaniard, sidelined by a rib injury for a month, hopes to build momentum in Rome for French Open crown
Sport
1 month ago
Next Article