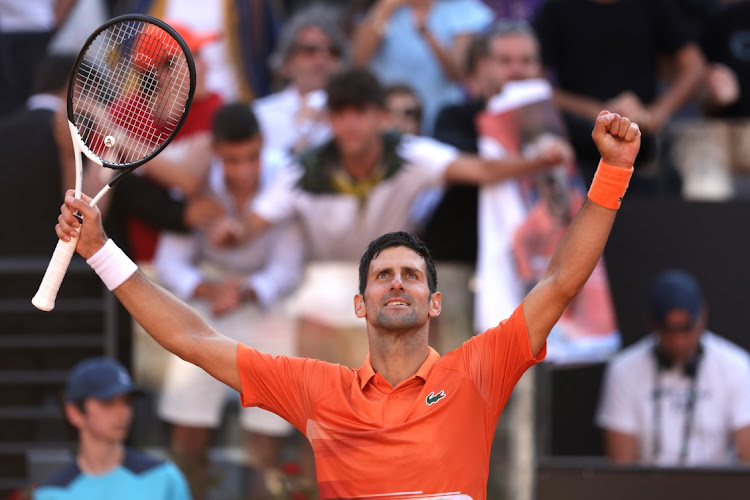 Rome — World No 1 Novak Djokovic claimed his first title in more than six months after beating Stefanos Tsitsipas 6-0 7-6(5) to win the Italian Open on Sunday.

Djokovic did not drop a set en route to the final in Rome, having picked up his 1,000th tour-level victory by beating Casper Ruud in the semifinal to book a clash with Tsitsipas — a repeat of last year’s French Open final, which the Serb won.

A sixth-successive win for Djokovic over his Greek opponent looked inevitable as he stormed through the first set with a blistering display of hitting, to which Tsitsipas had no answer.

Tsitsipas’s name rung around Campo Centrale in the fourth game of the second set, however, as an unforced error from Djokovic gave the Greek player two break points, the first of which he converted to take a 3-1 lead in the set.

After Tsitsipas held to make it 4-1, Djokovic then upped it a gear, winning five of the next seven games to take it to a tiebreak before sealing his sixth Italian Open title, and first since winning the Paris Masters in November.

It has been the perfect week for the 34-year-old, who became only the fifth man in the Open Era to reach the 1,000 wins milestone after Jimmy Connors, Roger Federer, Ivan Lendl and Rafa Nadal, ahead of the start of the French Open next Sunday.

Having swept the titles in Doha, Indian Wells and Miami, Swiatek has now won every WTA 1000 tournament she has contested this season and will be the favourite to add to her 2020 French Open success when the Grand Slam tournament begins next week.

Swiatek outmanoeuvred Jabeur to snap the Tunisian’s 11-match winning streak, which began in her title run in Madrid, to level their head-to-head record at 2-2 after having lost both 2021 meetings at Wimbledon and Cincinnati.

“Today I’m going to celebrate with a lot of tiramisu, no regrets,” said Poland’s Swiatek, who collapsed on the red clay at Foro Italico and broke down in tears after securing the title.

“I just felt huge relief ... I was just really happy that I could cope with all the pressure and expectations so well,” she said. “I have emotional reactions, but this one was probably the most emotional after winning the title.

“I mean, why not? It’s a week of tension and stress. Finally letting go [after that], for me that’s OK.”